SUCCESSES WITH QUERIES FROM THE PUBLIC 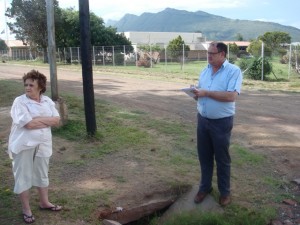 MPL Dacre Haddon during a recent visit to the Gariep municipality.

The DA Eastern Cape MPLs and their secretaries in Bhisho deal with queries from the public on a daily basis.

Eve Viol, secretary of Dacre Haddon and John Cupido, says:  “I just have files and files of people looking for houses, people being given the wrong house, people complaining about housing, bridges collapsing, and potholes and potholes everywhere . . . and complaints about the Departments. However, I find that through mutual respect and understanding we can build a good working relationship with people in the Departments and they bend over backwards, where they can, to assist. There are some who don’t even bother to reply but there are some who are incredible.  And I think they need to be applauded,”.

Here are some examples of successes from Eve’s files: