MESSAGE FROM THE LEADER – BOBBY STEVENSON: DA MAKES ITS PRESENCE FELT IN THE LEGISLATURE 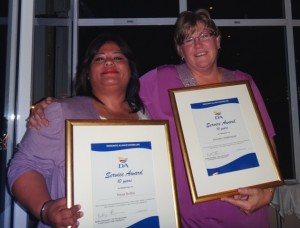 Two of the PA’s in the DA-office in Bhisho have clocked up ten years of service each. Left is Tessa Botha, PA to the Chief Whip and right is Annette Rademeyer, PA to the Leader in the Legislature. They were awarded certificates at a function in East London on Wednesday, 31 August

This month the DA MPL’s have been extremely successful in driving key issues in the Legislature.  Dacre Haddon, our spokesperson on roads, has succeeded in persuading the roads committee to approach the Premier to request emergency funding from the National Treasury.  Our roads are taking a pounding in the Province which is having an extremely negative effect on our economic growth potential.

Edmund Van Vuuren, our spokesperson on Education, was successful in persuading the portfolio committee to visit the Baviaans area where non payments to schools by the Department have been taking place.  Due to his intervention, an outstanding amount of R334 000 was paid to the Baviaans Municipality in respect of outstanding charges.  The DA will continue the fight to ensure province pays Municipalities timeously.

John Cupido, spokesperson on Health as well as Economic Affairs, also had a successful month.  Due to his engagement the portfolio committee has agreed to visit mortuaries in the Province that are in a poor state.  He also received a mandate from the economic affairs committee to try and resolve the closure of the Buffalo City Tourism Association and is in the process of arranging a meeting.

With the assistance of Dion George in the National Parliament, we managed to obtain just over R1 million in VAT that was owed to the Baviaans Municipality.

It was also heartening to see the ANC agree on our long standing position of barring civil servants doing business with the Province.  A proposal of mine to bar civil servants from doing business with the government was accepted last year by the SCOPA general conference.  When this is implemented, it will go a long way to ensure our funds are more efficiently and effectively spent.

Veliswa Mvenya, MPL has also vigorously engaged the Speaker in order to obtain a response from the MEC for Transport in relation to an outstanding report.

These are a few examples of how we are living out our credo – Making a difference, a force for change.