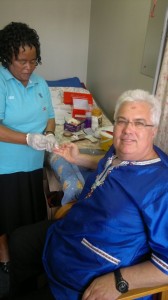 Bobby Stevenson undergoes an HIV-test as part of the DA’s awareness campaign.

There are three reasons why the Democratic Alliance is opposed to this year’s Adjustments Appropriation Bill.

The DA is not prepared to simply endorse a historical pattern that continues to repeat itself year in and year out.

Provincial Treasury requested a roll over of R1,416 billion from National Treasury.  Only the roll over request of R894 million was approved.  This means that R522 million that could have been rolled over was not rolled over.

Of this amount R400 million was for infrastructure but it was not rolled over because of our poor spending levels.

The bulk then of the roll overs, is conditional money that couldn’t be spent in the previous financial year – that in itself, is a tragedy but what is a double tragedy, is the fact that we now not even allowed to roll over money because of poor spending levels in this province.

SHIFTS FROM CAPITAL GOODS AND SERVICES TO PERSONNEL

When one interogates the shifts within the provincial finances that are contained in this adjustment budget, one sees that capital payments are reduced by R320 million and goods and services by R258 million which makes up the bulk of the additional R928 million which has been allocated to cover additional personnel costs in this budget.

While personnel costs continue to escalate, expenditure on goods and services as well as capital continues to decline.  We cannot support this trend.

The third reason why the DA is opposed to this adjustment appropriation bill is the additional amount of R27.5 million which is to be transferred to political parties.

The DA does not object to transfers to political parties – this is an accepted principle in this house and we are a recipient of those monies.  We will continue to claim our share otherwise it will simply be re-distributed amongst other political parties.

The real issue is the additional payment of R27.5 million this year when we have already received an allocation at the beginning of the year.

If this amount was R3 or R4 million which was designated to improve our constituency offices, we would not be objecting.  But the scale of this additional amount which is not in line with our province’s priorities.

When I raised this item in our finance committee, none of the officials wanted to answer it and I can understand why – because a political decision was taken to provide this additional allocation.

The conclusion that one draws is this huge additional amount has suddenly been made available to political parties because of the ANC centenary celebrations.  We all know that the governing party will get 70% of this money.

The DA believes that we have our priorities wrong.  We should be spending what funds we have on service delivery, fixing our roads, fixing our schools, fixing our hospitals.

The DA believes that this money should be surrended back to the Provincial Revenue Fund where it can be used for service delivery.

This is also not just the view of the DA but also the budget and oversight committee has made a recommendation that this money be surrendered back to the provincial treasury.  This was done so, prior to the knowledge that this money would be given to political parties and that is contained in the next item’s report.

I have outlined the three key reasons why the DA cannot support this adjustment budget.  We are not prepared to continue to say yes, yes, yes every year when the same patterns repeat themselves.

The finance committee has also reached the end of its tether when it comes to the expenditure patterns that we are experiencing in this province.

The committee as a whole cannot express its displeasure in the same manner as I do as they have to do so within the limitations of being members of the ruling party.

Let me conclude with these words :