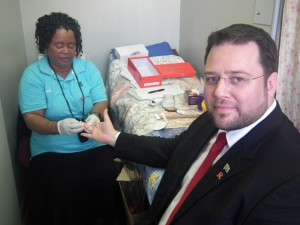 In this spirit of World Aids Day, DA provincial MPLs and staff took HIV tests on Wednesday during the sitting of the Eastern Cape Legislature.

The Democratic Alliance urges all members of the community to be aware of the scourge of HIV/Aids and to take control of their own destinies.

According to the Aids Prevalence Survey by the National Department of Health, almost a third (29, 9 %) of people in the Eastern Cape are infected with HIV.

The prevalence rate has remained constant within the age groups of 15-30-year-olds (15-24 years at 26, 7 % and 25-29 years at 37, 3 %).  This shows that HIV education is effective and younger, empowered women are starting to exercise their right to insist on the use of condoms.

But not enough is being done.  It is not unfair to require that everyone knows their status so that they can change their lifestyles and actions accordingly before it is too late.

What is disheartening is the notable increase of HIV prevalence in the 30-50 age groups:

These age groups are considered by society to be more mature and better informed.

There is nothing that will turn this disastrous situation around quicker than knowing your status and allowing those that you sleep with to make an informed decision.

Knowing what the problem is is one thing, but doing something about it requires the willingness to take responsibility.