Making a difference, a force for change 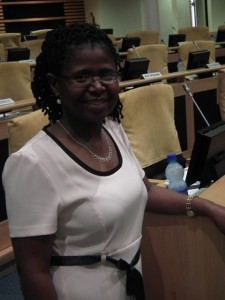 I am proud to have resolved queries for our voters this year but I will mention those that I think touched my heart most:

There are traffic officers who worked in the former Transkei who were underpaid by the Department of Transport.  They have been sent from pillar to post since 2002 without any solution. When I joined the Transport Portfolio Committee I made this an issue to drive.   Readers will recall the reports in the Daily Dispatch about the fight I had with the Speaker of the legislature about the plight of these people. It is my great pleasure to report that they have finally received their money (thousands) thanks to the efforts of the DA.

The most important query I resolved this year and which touched me deeply is that of Skhumbuzo Mphithiphithi.  He is a LLB-student who had to drop out of university because he could not afford to pay his outstanding debt. He found work in a shop, having lost all hope to continue his studies.  His dreams turned back into reality when I asked the Premier to pay his debt and to pay for his future fees. He is now back at Nelson Mandela Metropolitan University, where he continues his studies.

Another student, Bulelani, wrote to DA National Head Office after the Department of Social Development failed to pay his bursary.  His query was forwarded to me and again I managed to get him back to his studies, also at NMMU.

There are too many queries to mention, but these are just a few that that stood out for me.

May you all have a fantastic holiday.  And don’t forget to ask people to join the party of open opportunities!