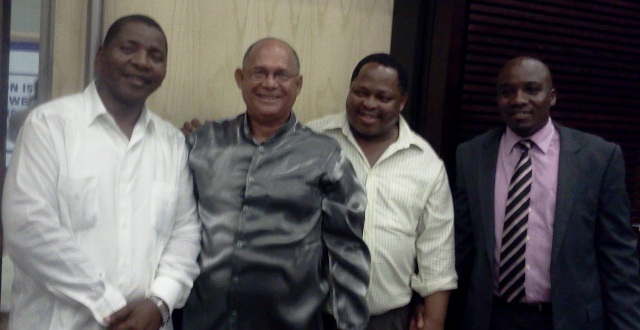 The Hon. Humphrey Maxegwana, Chief Whip of the Eastern Cape Legislature, Hon. Edmund Van Vuuren, DA spokesperson for education and Loyiso Pulumani, Department of Education spokesperson, at the ceremony of the grade 12 results held on 5 January 2012, at the International Convention Convention Centre in East London.

The process of post provisioning has been completed, but sadly 8 000 vacancies have as yet not been filled. This is of grave concern as the absence of teachers in classrooms will have a detrimental effect on the provision of sustained quality education.

There are currently 6 715 teachers in excess and a further 2 103 are to be employed to fill all existing vacancies within the Eastern Cape. The placement of the 6715 additional teachers have been slow due to resistance on the ground as well as non compliance by certain schools to identify teachers in excess and the non adherence by District offices to implement and supervise the movement of teachers.

Up to date only 200 teachers in excess have been appropriately placed, whilst 592 requests for retention of temporary teachers have been verified and endorsed for appointment. It has been confirmed that the Department of Education in the Eastern Cape has issued letters to the 592 teachers in 10 districts, to be appointed on a temporary basis until 31 March 2012. These interim measures should be accelerated so that all applications for retention of the other 1 511 temporary teachers in the other 13 districts are finalised sooner than later. This Department must ensure that all schools have a teacher in front of the class, whilst the process of teacher redeployment continues. It is clear that not all classrooms had a teacher when schools opened on 11 January 2012.

In certain districts, especially in the rural areas of the Eastern Cape, temporary teachers, whose contracts were terminated on 31 December 2011, were wholly responsible for the teaching of critical subjects, such as Mathematics, Physical Science, Life Sciences, Agricultural Science and Accounting. Currently learners in these remote areas of Libode and Cofimvaba are not receiving any tuition in these subjects.

It is incumbent upon this Department of Education to exercise its responsibilities towards the core function of education which is teaching and learning, by providing a teacher for every available subject and classroom. Although there are challenges in the implementation of the post provisioning, this Department has once more horribly failed our learners. These 8 000 vacancies, if not filled soon, either through teacher redeployment or retention of temporary teachers, will result in not maximising teaching time, creating frustrations, uncertainties and disruptions which will ultimately deny our learners access to quality education.

This Department has delivered on some of the key performing areas.  School nutrition has been decentralised to schools, with schools taking full responsibility in providing meals to 1 692 643 learners in 5132 No fee schools across the Province. R600 million for feeding was transferred to these schools and all learners in these schools were fed as from the first day of school. There were some systemic issues encountered such as poor quality of food and inflated prices of food commodities, but these are being addressed.

The Department of Education needs to address other priority areas more adequately and effectively, such as School Infrastructure, deserving learners not transported, Caps (Curriculum Assessment and Policy Statement) Textbooks and workbooks for Grades 1 to 3 and Grade 10 not delivered, Stationery to 892 schools still outstanding and the lack of sufficient furniture in schools. The high rate of absenteeism must be addressed with the necessary urgency. On a visit to schools in the Cofimvaba area a number of principals were conspicuous by their absence.

It has been confirmed that Caps textbooks and workbooks to Grades 1 to 3 and 10 will most probably only be delivered during the months of February and March, which implies that the above grades will have no material to work from for the first two months of the year.

Only 56 000 learners are transported, whilst there are a further 59000 deserving learners not transported. In the Cofimvaba District alone, which is rural in nature, only 1 900 are transported out of a possible 7 000 deserving learners. In Lady Frere the situation is almost the same with about 1 900 out of a possible 4 500 transported. This discrepancy should be rectified by the Department of Education in the Eastern Cape as the majority of learners that are supposed to be transported must now walk long distances, even crossing rivers to get to school. Too many of our learners in the least affluent areas are been disadvantaged.

School Principals have only utilized R107 million of the R370 million allocated to them for the procurement of textbooks. This type of behaviour can never be condoned whilst there is a 30% shortage of textbooks in our schools.  The Department needs to investigate this under spending and take appropriate steps.

The Democratic Alliance wishes all learners and teachers a successful 2012. All role players within the education system need to be committed towards providing quality education to our children by maximising teaching time.  Education is the foundation for opportunities.