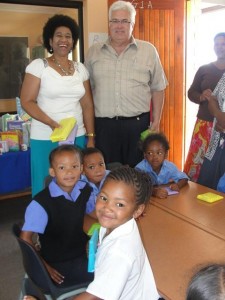 Bobby Stevenson with Mrs. Dubula, principal of the Kuyga Intermediate School in Port Elizabeth, where the DA handed out stationary packs to Grade R-learners at the beginning of the new school year.

Booysenspark High School in the Northern Areas of Port Elizabeth is an amazing inspirational story of what leadership can do to turn a school around.  This school has consistently been at the bottom-end when it comes to results, is under resourced and is in a community of shacks and RDP-houses.

In 2011 the Grade 12 pass rate improved from 42,5 %  to 85 %.  I went to see the principal, Mr. Elroy Bosman to ask him what the secret of his success was.  His answers can be applied to many situations in life as the principles are the same.  It is a leadership lesson par excellence.

Firstly, don’t use your circumstances as an excuse for failure, look beyond them.

He decided that they would look beyond their difficulties such as lack of resources and strive to get a different outcome.

Secondly, if you want to achieve success, it is not a one-man show, one needs to work as a team with everyone involved.  He motivated his team of teachers to throw their weight behind this project. He inspired them as to the difference they would make in the individuals lives and ultimately the community.

Thirdly, they all went the extra mile.  Each learner was visited in their home so there was an understanding of their personal circumstances.  Lack of electricity and five people sharing a bedroom was not conducive to a homework environment, so the school provide extra lessons including meals so learners would not go hungry.

Elroy Bosman believes passionately in his mission and that passion proved the inspiration and vision to make a difference.

Imagine what 100 Elroy Bosmans could do for education in the Eastern Cape.

A new year as now begun.  Let us dream big and reflect on how we can be greater difference makers in our sphere of influence.

The noted American author and productivity consultant Denis Waitley said:  “There are two primary choices in life to accept conditions as they exist or accept responsibility for changing them for the better.”

That is the credo I live by and I challenge you to do the same.

One comment on “MESSAGE FROM THE LEADER – BOBBY STEVENSON”