MESSAGE FROM THE LEADER – DA IS STRONGEST CONTENDER 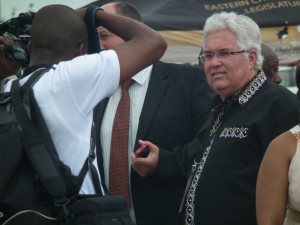 DA legislature leader Bobby Stevenson poses for the cameras at the State of the Province Address in Bhisho. Athol Trollip, DA leader in the Eastern Cape, is in the background

It’s with pleasure that we send you this special State of the Province Bhisho Brief.  You will find speeches of some of my colleagues in this edition that were presented in the legislature.  From these speeches you will see how the DA is leading the debate and making its impact as the chief challenger to the ANC.

The State of the Province Address (Sopa) has propelled the DA into the media as the de facto alternative in this province.  The DA is increasingly seen as a key challenger to the African National Congress for power in this province.  The fact that we received over 40 provincial and national pre- and post-Sopa media hits highlights that the alternative views of the Democratic Alliance are taken very seriously.

The DA is strongly promoting the idea that this province needs bold, brave and decisive leadership if we are going to bring about the sweeping change that the people are crying out for.

Our thanks to our hard working DA legislature staff who work in a frustrating environment for assisting in making the DA into the force for change that it is in the legislature.