MVENYA: LAUNCH OF ANOTHER DA-BRANCH IN FORMER TRANSKEI 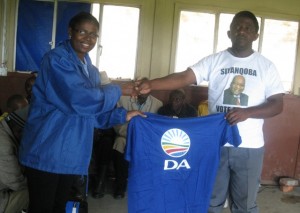 MPL Veliswa Mvenya with Mr. Mgebhuzo in a symbolic gesture of exchanging his ANC-T-shirt with a DA one at the party’s launch of a branch in Ward 20 of Nyandeni Municipality in the former Transkei.

MPL Veliswa Mvenya travelled to Ngqeleni Village in the former Transkei on 20 February to welcome the local ANC branch chairperson to the DA with his people in Ward 20.

More than 150 signed up members were present and Mvenya and her team left another membership book behind which was being filled with more members.  Mr. Mgebhuzo, chairperson on the ANC branch there, who was wearing his ANC T-shirt, made a symbolic gesture by exchanging it for a DA-shirt on.

In his speech he made it clear that he will never go back to the ANC because it is not democratic and does not deliver on its promises.

This is the seventh branch in Nyandeni Municipality since the municipal elections last year.  “We have two councillors in this municipality.  I already have more invitations from that area to visit and establish new branches,” Mvenya said.