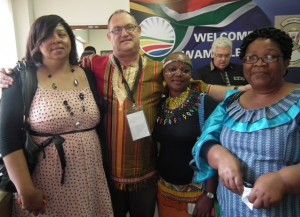 Dacre Haddon MPL (second, left) with some of his guests from the Amathole constituency who attended the State of the Province Address on Friday, 17 February. They are, from the left, cllr Josephine Kaniye, Fort Hare DA Youth representative Busisiwe Mqamela and cllr Julia Gxalaba.

Madam Premier we congratulate you on your State of the Province Speech.

The initiatives such as the Strategic Skills Project, the Youth projects for the unemployed and the provincial “Jobs” programme are welcomed.

Speaker, the urgent challenge facing South Africa and the province today is poverty.

Everything we do as politicians must be focussed towards creating opportunity for sustainable job creation.

There needs to be decisive and courageous leadership to make this happen.

There are two main economic drivers that create sustainable employment in any provincial economy.

The first of these is the creation of infrastructure growth involving financing and skills partnering with the private sector.

Another way in which rapid and sustained economic growth will take place is with coordinated economic opportunity.

Infrastructure development on its own will not create jobs.

Linked to this must be a plan to coordinate, develop, manage and maintain infrastructure by qualified and able persons.

If this does not happen then our current infrastructure problems will persist.

Honourable Speaker I wish to further unpack the concept of coordinated growth in more detail.

In the Western Cape, Premier Helen Zille has developed and registered an Economic Development Partnership.

An Economic Development Partnership is one in which a body of stake holders in an economy come together to develop a shared vision and agenda for economic growth and development.

The concept is a radical breakthrough and breaks away from the fragmentation of organisations separately trying to achieve the same objective to create employment  –  to one of sharing, collaboration and co operation.

Yes Speaker, this is the trick – an efficient seamless partnership that co-ordinates employment role players and skills developers into a single partnership structure to speed up employment opportunity.

Speaker, the lack of implementation and problems with coordination of job initiatives is one of the main reasons why sustained job creation is failing in this province.

Therefore I would respectfully request the Honourable Premier to engage with Honourable Zille on the concept of Economic Development Partnerships when they next meet  . . . maybe at the next Presidential Premier Legotla?

Madam Premier, there needs to be sweeping change and visionary leadership to create jobs on a massive scale in this province.

We cannot have another year of “business as usual” – this province is sitting on a time bomb of unemployment – especially among our youth!

So Honourable Speaker let us be fearless and apply these best practice methods used successfully in the Western Cape in this province for the benefit of all citizens.

A department with a cell centre has been established to assist citizens to access employment and other services when they are hindered by red tap bureaucracy.

Speaker, the second aspect of my speech relates to Local Government.

It is pleasing to note that on page 25 of the report the premier reports success on implementation of Local Government Turn Around Strategy to 13 municipalities.

However we note with concern the following:

1)      A cost of R32,9 million was spent to support this intervention when in fact proper financial management should have been taking place at all times.

2)      A third – some thirteen of our municipalities needing section 139 and 154 interventions is of great concern.

The Premier’s speech on Local Government and Housing is a self- congratulatory back-slapping exercise.

Speaker, various forensic reports alleging wide spread corruption in Local Government and Housing have not been released by the departments as required by legislation.

Why are you allowing these reports to be pushed under the carpet?

I refer to the Price Waterhouse report on the Sundays River housing fraud and the forensic reports on the Gariep Municpality.

Why has the Gobodo report on Koukamma municipality (finalised and given to the department in September/October 2011) been hidden?

Speaker, some of these reports were finalised as early as 2010 and still have not been released to this Legislature and the public.

A court order had to force the MEC for Local Government to release the Kabuso Report last year.

Speaker the 4 reports from the Auditor General into the corruption in Kouga was released in 2008 but they have never seen the light of day.

Why Premier are you not forcing the relevant MEC’s to release these reports?

Speaker, yet again Sundays River Municipality wanted to illegally appoint a municipal Manager who had been fired and dismissed from Bitou municipality for misconduct.

The irregular ward committee elections that took place last year in many municipalities have not been annulled.

Honourable Premier Madam you need to give an explanation to this Legislature when you respond to this debate. We request you to immediately order the release of these reports for the good of clean governance and accountability.