SPEECH NOTES BY PINE PIENAAR, DA CHIEF WHIP IN THE PROVINCIAL LEGISLATURE, SPEAKING ON THE STATE OF THE NATION ADDRESS — TUESDAY, 21 FEBRUARY 2012. 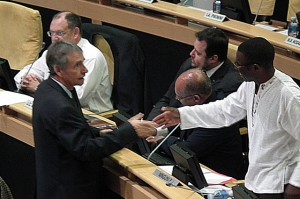 Pine Pienaar, DA Chief Whip in the legislature, greets MPL PJ Mnguni of the ANC, before the commencement of Tuesday’s debate on the State of the Province Address.

As we embark on yet another year in this Legislature I cannot help but to think about leadership.

In essence, the work we do in this chamber is about leading the Province of the Eastern Cape.

To achieve greatness and success, we need to have great leaders. We need to follow in the footsteps of the great leaders of our past: ¬the ones who dedicated their lives to bettering the lives of all South Africans.

The seventeenth-century scientist Sir Isaac Newton famously said the reason he understood so much of future intellectual pursuits — or as I see it, the reason he could see so far into future scientific developments — was because he stood on the shoulders of giants.

We are indeed dwarfs standing on the shoulders of giants. Those who came before us set the example and it is for this reason that we have a responsibility to continue this work.

And we have seen great success in leadership in recent times. Since the Democratic Alliance took over the leadership of the Western Cape, they have dealt with the wasting of time and money, maladministration, wasteful expenditure and the lack of job creation.

What the DA has done in the Western Cape should be a strong message to the rest of South Africa of what actually can be achieved in a short space of time.

This year, ¬ honourable members, ¬we should declare “the year of job creation”, LONYAKA MGUNYAKA WEMISEBENZE. I love the theme, because creating jobs will help us to achieve our ultimate goal of fighting poverty and boosting development.

And work and wealth are the things we as leaders of this province want to create as well. But as government, we are not entrepreneurs.

In fact, I can assure you that we are particularly bad at business. One thing we CAN however do is to create the environment for boosting entrepreneurship.

To illustrate this, let’s take our contract with Fleet Africa. Last time I looked the contract was worth R3-billion. Entrepreneurs in this province did not benefit from this contact at all. We have now taken the contract away and will manage our own government motor fleet again. What will we achieve with this?

We know from history that it is too expensive and as with entrepreneurship, we are not particularly good with managing a fleet of cars. Again, ¬we have already proven that we are very bad at it.

So where do we go? We should unbundle this contract and break it into our seven districts. Let the entrepreneurs in our regions run our fleet.

It will create more than 20 000 jobs in this province, benefiting our own innovative local business minded entrepreneurs, mechanics, cleaners and administrators.

Getting back to leadership… if we want to be good leaders, we need to work smarter. And again I need to illustrate this. Let’s take the former Amatola Sun Hotel. Just over five years ago we as a government purchased the building that used to house the Amatola Sun Hotel. I have no idea why we did it, but I do know we paid R10-million for it.

Today it’s a dilapidated building, stripped by vandals, while we are paying security services hundreds of thousands of rand to patrol and protect the building.

We are also paying rates and taxes and other related fees on a building that we will most probably not be able to sell at a fraction of a price we purchased it for.

Let’s be smart. As a government we are not in the property business. Leave this to the experts. Leave it to the entrepreneurs. At the best this was fruitless and wasteful expenditure.

Now Mr. Speaker, to get to job creation. We’ve had a wonderful plan to create jobs when we came up with the Extended Public Works Programme, EPWP as we all know it. This plan was created to give ordinary people the opportunity to get involved and benefit from smaller government jobs like the painting and maintenance of schools, clinics, hospitals and other government buildings.

But this is not happening. We need to make sure every single provincial government department outsources at least 10% of their contract into the EPWP. And we need to measure the success of it every 6 months.

When local people get the opportunity to do plumbing, painting, gardening or other maintenance work at government buildings in their community it will not only create jobs, but create an environment for entrepreneurship.

It will also create a sense of pride for Government property within the community. If we set targets for senior managers to achieve within the EPWP, we will see how many jobs will be created in a short matter of time.

Lastly, Mr. Speaker,we need to take leadership with regards to the maintenance of our roads.

Floods during 2010-2011 caused damage to roads estimated at R1-billion. Only R400 million was given to repair the damages by floods of the value of R1 billion.

At this rate we will lose our roads. Anybody with even the smallest knowledge of road maintenance will tell you that it is much cheaper to maintain a road than to build new roads.

To do this, we need to take leadership in budgeting properly for road maintenance. It costs between R12 and R16-million to build only 1km of road.

Having taken that into consideration, we need to spend at least 60% of our budget on maintenance of roads, because it is too expensive to build new roads once old roads have fallen into disrepair.

How embarrassing was it when contractors had to fill potholes in the new Nanaga road, one day before it was set to open.

Think of that? Potholes in a road that has not even carried traffic yet. Again a wasteful and expensive exercise in how not to do things.

To assist road builders further, we need to overhaul our own supply chain management. Some in-house road maintenance teams complain that it takes up to 10 months to get material on site to start road building or maintenance.

No wonder our economy is not growing. Supply chain management is one of the most important things to boost entrepreneurship and create jobs.

Again the onus is on government to get its internal processes running smoothly. If we lead by example, others will follow.

Mr. Speaker, we might be following in the footsteps of giants, but if we don’t emulate them, we will forever be dwarfs and history will rightly judge this government as dwarfs if we do not get our act together.