MESSAGE FROM THE LEADER, BOBBY STEVENSON: PREVENT ANOTHER LOST GENERATION 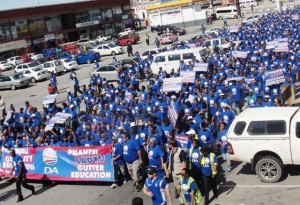 Blue Wave...some 1 300 DA supporters, teachers, pupils and principals participated in a march in Human Rights Day to the offices of Sadtu in Port Elizabeth to highlight the rights of learners to a quality education, and against Sadtu’s policies that are jeopardising this right.

The Democratic Alliance’s Human Rights Day activities focussed on the issue of the failing education system in the Eastern Cape.  The learners’ right to a decent education is being violated by the role of government on the one side and the unions on the other.  This highlights an underlying issue:  namely the lack of response by parents and civil society at large to this massive injustice that’s being perpetrated on millions of learners.

What we need is a new civic re-awakening.  In a report in the Daily Dispatch on 22 March, Black Consciousness Movement activist Dr. Mamphela Ramphele alluded to active citizenry being replaced with passive subjects.  In a recent article in Business Day, John Kane–Berman, Chief Executive of the South African Institute of Race Relations, on a similar theme referred to the spirit of resistance being replaced by a spirit of acquiesce.

What this highlights is a docile citizenry which is simply prepared to sit back and let a new lost generation of learners emerge.  Have people’s minds and willingness to act become so colonised by the ANC — for fear of losing their jobs, tenders or being accused of betraying the struggle — that they are prepared to turn their backs on our future generation?

History is going to judge this error of education in the Eastern Cape harshly if nothing is done to turn the situation around.  Just as people of influence who knew better, where too afraid to stand up against the apartheid-machine, so today, similarly, we find many people who also know better, are too afraid to stand up against this massive injustice.

The future can be different. In the Western Cape the poorest 20% of schools increased their Grade 12 pass rate from 57% to 70% in 2011.  In contrast, the Eastern Cape went backwards. We can turn the situation around, but it will need people to take a stand.

What we need is a civic revival where civil society takes ownership of what is happening in the schools of this province and demand of government and unions the changes that need to occur for a learning environment to be created.  The question that remains is why people, who have a history steeped in the struggle for decent education, are prepared to simply roll over and let this gross abuse of human rights continue?