FROM OPPOSITION TO THE UNION BUILDING: MNQASELA 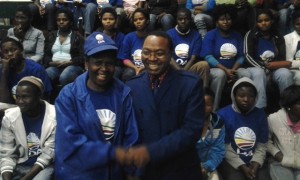 Veliswa Mvenya, deputy provincial leader and spokesperson was in Mthatha with Masizole Mnqasela, DA Shadow Deputy Minister of Home Affairs for Youth Day. The theme was the Youth Wage Subsidy.

This is an extract of a speech delivered in deputy-provincial leader Veliswa Mvenya’s constituency by Masizole Mnqasela, DA Deputy Shadow Minister on Home Affairs, at the DA’s Youth Day rally in Mthatha.

I have come here today to deliver a simple message.  A message of hope. That it is possible to liberate South Africa from the tyrant rule of the ANC.  If the youth of 1976 could do it against the armed forces of apartheid, so can we. They defeated a brutal and inhumane system through unity and perseverance.  We can beat this corrupt and useless government of the ANC. We can do so through the ballot by voting them out of power.

Today, June 16, is exactly 36 years since the Soweto uprising in 1976, where arbitrary and deadly force was used to silence and destroy young, desperate students. That means 36 years of the struggle for a true liberation of young people, mainly black and poor. The ANC has promised a better life for all but delivered a better life for the select few in the ANC.  None of us have received that promised life. We need to travel a new road.

We need to begin a road to the Union Building.  It is much shorter than we may have imagined, but certainly not an easy one.

South Africa needs courageous and visionary leadership. We need the Steve Bikos of today; we need the Hector Petersen of today.

This country needs hope and that hope we offer as the DA.   We need to remember and honour our history but we need to take responsibility for our future. Our actions today will determine the strength to traverse the road ahead. The decision we make today will give a clear picture of how South Africa will be tomorrow.

We need a successful country for our children and the children to follow after them. A successful South Africa begins here. It begins with you. You are the people who hold the future we want.

The future we have started to shape in the Cape Town and the whole of Western Cape.  A future of One Nation with a common objective of developing this country for all who live in it. Black and white.

Under the DA the future is clearer and where we govern we have displayed this. Chances of success are better under the DA government than it is where the ANC rules.  Compare Mthatha and Cape Town. You don’t need to look far, just look around you. Today children as young as nine are pregnant.  In South Africa, in terms of the recent survey, 109 children in Grade 3 are mothers. This is a collapse of our education system, it is a decay of our prestigious society. A staggering 70% of the 26% unemployment figures in this country are young people.  Hence the DA proposes a universal roll-out of a Youth Wage Subsidy. It will open doors to many young people to gain access to an employment opportunity. Wherever you go you are told that we need diplomas and some form of experience. How will young people get the experience and be able to be gainfully employed if the ANC government does not accept our idea of implementing a Universal Youth Wage Subsidy?

We need One Nation with One Future.

The life and service we have begun to offer in Cape Town is a story that we need to replicate in all cities, towns, townships and villages. We need to go from street to street, from house to house and tell a new story of hope. Go and tell them that it is possible to be free in South Africa and that freedom is the freedom the DA will offer to them.

Let us begin a new journey a journey to the Union Building, a journey we have begun to make.

Our road to government is no longer a dream but it is a reality.  Bhisho needs us, because for this province to succeed we need to be in government and take over Bhisho.

It has become inevitable that we belong to the Union Building. Even Zwelinzima Vavi of Cosatu believes that.  We are no longer just a mere opposition. We are the government in waiting.    We are moving convincingly from the opposition to Union Building.