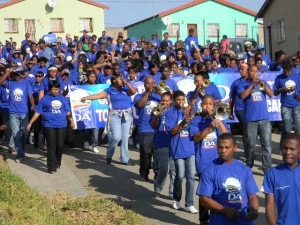 Youths march to a DA-rally for Youth Day in Buffalo City.

The recent debate around the poor state of education, the youth wage subsidy and the disruption of the government’s National Youth Day-event held in Port Elizabeth have catapulted youth issues to the forefront of our political debate.  This is long overdue.

In fact, Cosatu general-secretary  Zwelinzima  Vavi  in response to the DA youth wage subsidy march in May  warned  that the ANC was sitting on a ticking time bomb that is starting to explode in reference to the unemployment crisis.

With 77% of young people supporting a youth wage subsidy, the ANC is increasingly out of touch with the needs of the youth, while the DA is at the forefront of championing the rights of unemployed young South Africans.

But unemployment is not the only issue impacting on the youth. At the recent Children’s Sectorial Parliament held in the Provincial Legislature on 8 June, young speakers highlighted the following issues:  Ukuthwala (forced marriages), child trafficking, access to quality education, orphans and child-headed households as well as substance abuse.

Political parties need to ensure that they have an emerging crop of young leaders, otherwise they can fall prey to the generation gap. With 70 % of the population under the age of 30, this means a political party can become steadily out of touch if it does not have programmes in place.

This results in new and creative energy being brought into the DA.  As a result of this we saw the DA successfully win the SRC election at the Nelson Mandela Metropolitan University last year.  Branches of DASO have been formed on campuses across the Eastern Cape. .

The Democratic Alliance had a series of Youth Day events throughout the province where MPLs Veliswa Mvenya, Edmund van Vuuren, Dacre Haddon and myself addressed meetings.  The provincial leader, Athol Trollip and other members of the national parliament and NCOP also addressed meetings.  This is as a result of the importance that we place on youth matters and youth involvement in our party.