NO EDUCATION, NO JOBS: HUMAN RIGHTS COMMISSION MUST INVESTIGATE DEPARTMENT OF EDUCATION OVER COLLAPSING SCHOOLS IN THE EASTERN CAPE 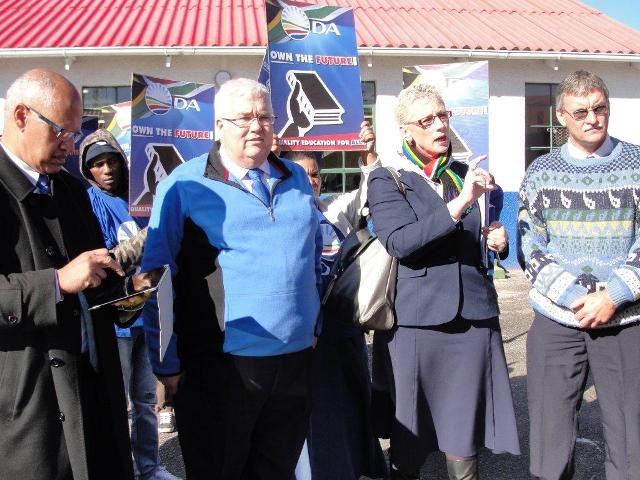 DA Federal Chairperson Dr Wilmot James MP, DA Leader in the Eastern Cape Legislature Bobby Stevenson MPL, DA Shadow Minister of Basic Education Annette Lovemore MP, and Nelson Mandela Bay Metro councillor Stanford Slabbert visited Lovemore Park Farm School outside of Port Elizabeth on 2 August 2012. This visit forms part of the DA’s Jobs Campaign. Delivering quality education to all is a central component of the DA’s Plan for Growth and Job Creation. visited the Lovemore Park Farm School in the Eastern Cape. This school, just 15 minutes outside of Port Elizabeth, has been abandoned by the Department of Education, and is on the brink of collapse.

DA Federal Chairperson Dr Wilmot James MP, DA Leader in the Eastern Cape Legislature Bobby Stevenson MPL, DA Shadow Minister of Basic Education Annette Lovemore MP, visited the Lovemore Park Farm School in the Eastern Cape on 2 August 2012.  This school, just 15 minutes outside of Port Elizabeth, has been abandoned by the Department of Education, and is on the brink of collapse.

The terrible conditions in which these children must endure is not only an infringement of their constitutional right to access education, but is also in clear violation of the constitution’s emphasis on the rights of the child being of paramount importance in all matters.

One year ago, DA Councillor Stanford Slabbert arranged a site inspection with senior education officials to highlight these issues at the school. To date nothing has happened.

On the 25 July, Leader in the Provincial Legislature Bobby Stevenson took the matter up with the Eastern Cape MEC for Education, Mandla Makupula. There has to date been no response to his letter.

It is now necessary to elevate this matter further. The DA will therefore be writing to the Human Rights Commission to report the Department of Basic Education for their violation of the rights of these children, and others across the province.

The DA Shadow Minister for Basic Education Annette Lovemore will also be submitting parliamentary questions to Minister Motshekga to get answers as to how this has been allowed to happen across the province.

Indeed, Lovemore Park Farm School is not the exception. Across the Eastern Cape, schools continue to lack the necessary funding, maintenance and teachers to ensure that our children receive a quality education.

To be put simply, the Eastern Cape has a serious backlog in education infrastructure, and the government does not have the money or the skills to fix it.

At the heart of the problem is the poor leadership demonstrated by the ANC in the province. Pervasive corruption and maladministration – which eventually forced the National Department to intervene – has meant that the children of this province are on their own.

This is in clear contrast to where the DA governs. In the Western Cape, the provincial government will build 81 new schools in the next three years, which would replace many school buildings that had fallen into disrepair. The total budget for this project would exceed R3 billion.

In addition, the Western Cape Department of Education spent 99% of its total budget in the 2011/2012 financial year.

The ANC is costing young South Africans their futures. Without access to quality education, and basic skills in literacy and numeracy, our young people cannot hope to find a job.

This is why the DA has made education through job creation a central pillar of our Plan for Growth and Jobs. In order to grow our economy, and create more jobs, we must ensure that we provide a quality education to all of our children.

The DA will do everything possible to ensure that this happens. We will fight for the children of the Eastern Cape – and we will not give up until they too can benefit from the many opportunities a growing South Africa will offer.