HOW TO STOP THE CARNAGE – HADDON 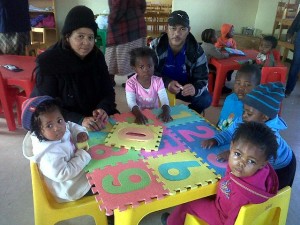 Members of the DA in MPL Dacre Haddon’s constituency, Amathole, participated in programmes in a number of towns for Mandela Day. Cllr Josephine Kanie from Fort Beaufort and Cllr Donovan Gysman from Alice donated of toys at Nomzamo Pre-School in Alice.

The recent tragic accident, in which at least 17 people, including the principal of Cradock Primary, two learners, and thirteen passengers in a minibus-taxi were killed, again highlighted the need for urgent measures to ensure better policing of long-haul taxis.

At the mid-July sitting of the legislature, DA provincial spokesperson on Transport, Dacre Haddon, made some practical suggestions to the house.

This is an extract of his speech:

The Department needs pro-active budgeting in order to equip all provincial traffic stations.

The Democratic Alliance welcomes the commitment by the MEC for Transport to introduce a 24 hour traffic patrol in the province following the Cradock school bus accident tragedy on Saturday 21 July, 2012.

However, why is such a commitment made after a tragedy and loss of lives in such a ghastly accident?

If there had been traffic officers deployed at the Eastern Cape road boundary, is it possible that law enforcement intervention by these officers when the vehicle entered the province, could have prevented this horrific accident from happening?

Two years ago I put forward a motion on behalf of the DA that there should be on-going cross-provincial traffic law enforcement.  That motion was tabled following another bus accident tragedy involving a bus from the Western Cape.

Traffic officers need to be motivated, well equipped and have high morale if this province is to radically reduce motor accident deaths on our roads.  If managerial basics are in place, then issues like staff morale and willingness to go the extra mile will automatically fall in place.

The Department can’t expect positive results from campaigns such as “Drive Alive” unless the basics of traffic management are in place.

Why has this been achieved?

Here in the Eastern Cape we need to do the following:

If the department implements these recommendations as soon as possible, this province will see the fruits of effective traffic management for many years to come.