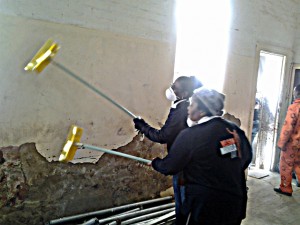 DA provincial spokesperson and deputy leader Veliswa Mvenya (at t he back) scrubs the walls at the Healdtown Comprehensive High School in Fort Beaufort, as part of the Bhisho Legislature’s Mandela Day programme.

I recently discovered yet another abandoned, overgrown site of taps and toilets in the veld at Elliotdale in the Mbashe Municipality.  How much money has been wasted on this failed project and has any action been taken against those responsible?

Passing the buck between departments, rather than taking responsibility for poor service delivery will never sort out the problem of failing housing projects in the province.  People are crying for houses.   This project dates back to 2002.  Last year I visited an equally gloomy project in the same municipality at Dutywa.  At the time I said Govan Mbeki would have been horrified to learn that such a sad, failed project had been named after him.

Clearly there is a problem with housing service delivery in this municipality.  This problem is amplified by the fact the Amathole District Municipality (ADM) of which Mbashe is part, has a continued trend of under expenditure.  In 2010/2011 ADM spent only 68,13% of its grant funding.  The mid-year report for 2011/12 indicated grant expenditure of 63%.

In reply to a written question I asked the MEC for Local Government, Mlibo Qoboshiyane about the failed Dutywa project, he simply stated that “housing is a concurrent function between provincial and national departments of housing or human settlements”.

Passing the buck does not solve the problem.  Last year Qoboshiyane revealed in the media his plan to establish a monitoring group to hold mayor accountable by signing service level agreements (Daily Dispatch, 12 August 2011).    We cannot allow the government to get people’s hopes up for service delivery projects that simply fall by the wayside because of poor oversight and mismanagement.

The DA believes that service delivery is a cornerstone of good governance.  I appreciate the response to my oral question in the legislature last week by Housing MEC Helen Sauls-August that another contractor would be appointed to finalise the Elliotdale project “within this financial year”.  But abandoned projects, shoddy workmanship and poor management can no longer be tolerated.

Our people deserve a sense of pride and respect for themselves and for their property, rather than suffering the indignity of having to remain passive and powerless recipients of government handouts.