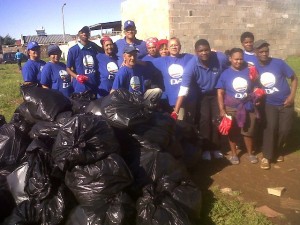 Members of the DA in the constituency of MPL Edmund van Vuuren in PE North held a clean-up in Arcadia (Ward 34) on Mandela Day.

The DA identified chronic workbook shortages in yet another Eastern Cape Education district during a visit to schools in the Queenstown area.  The Minister for Basic Education, Angie Motshekga, must act now and address these problems.  It’s all very well for the Minister to move to Limpopo to sort out the textbook crisis there but what about the workbook crisis unfolding here in the Eastern Cape?

Last week I visited Louis Rex primary school in the Queenstown district where shortages of workbooks across all subjects for Grades R -7 were identified. The school had also received Xhosa books for Afrikaans learners.

The school is unable to get the outstanding books from the district because there is no stock available. Workbooks for the 1st and 2nd Quarters that should have been delivered in January have also never arrived.

We took this matter up with District Director, Nkosinathi Godlo, who has conceded that workbook shortages at schools are widespread in the district.

The DA contacted a number of schools in the district to verify this. For instance, Nceba public school had received Afrikaans workbooks for some isiXhosa-speaking classes. Other schools like Lukhanji, Mthawelanga and Nolitha primary schools were either experiencing big shortages or had not received certain books at all.

This is the same problem the DA identified in the Port Elizabeth district. During an inspection of the district warehouse we witnessed thousands of workbooks being returned by schools in the PE vicinity due to schools receiving the incorrect languages for learners. In many cases isiXhosa-speaking learners had received books in Sesotho.

Our visit to the Queenstown district demonstrates how the Basic Education Department falsely claimed to the media on Sunday, 22 July, that chronic workbook shortages for Eastern Cape children is limited to the Port Elizabeth district.

Both the national and provincial Education Departments have completely botched the ordering process for workbooks in the Eastern Cape.

More than two weeks of the third term have now gone by and children still do not have the books that contain all the exercises relevant to the curriculum.

We expect Minister Motshekga to act immediately to address this problem that is affecting so many Eastern Cape learners.