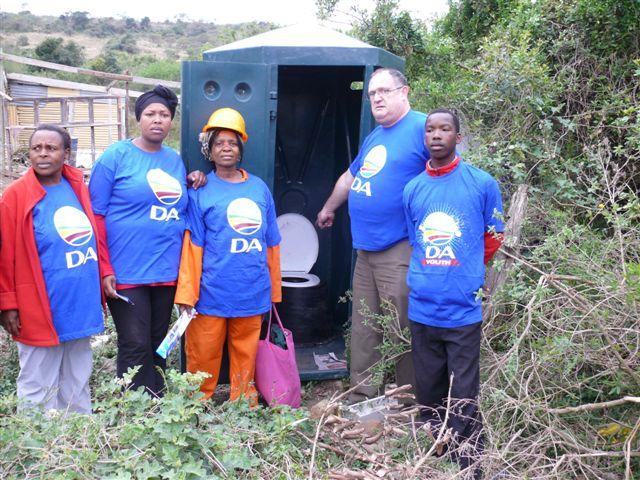 Dacre Haddon (back), Shadow MEC for Local Government points to a portable toilet that was delivered by the Great Kei Municipality to the Khayelitsha Informal Settlement in Chintsa East after being informed that the DA would visit the area the next day to assess the poor levels of service delivery in the area.

The Democratic Alliance will be assisting the shack dwellers of Chintsa East’s Khayelitsha informal settlement to enforce Section 24 of the Constitution to obtain decent toilet facilities in the area.

The deprivation of basic human services is an offence in terms of Section 24 of the Bill of the Constitution, which gives everyone the right to an environment that is not harmful to their health and wellbeing.

These folk have every right to enforce these environmental rights and the DA will assist them by:

1. Engaging with the MECs of Human Settlements and Local Government for funding;

2. Assisting with written representation to the Municipal Managers of Great Kei- and Amathole District municipality;

3. Assist them to petition the Legislature’s Portfolio Committee on Housing to attend to their plight.

If necessary this issue will be taken up at higher level as well.

On Tuesday, 21 August, eight portable, bucket-type toilets were delivered because the municipality heard of the DA’s visit with the media which was planned for today.

Why is it that a few token toilets can immediately be delivered when a municipality faces the prospect of media embarrassment? This shows that there is capacity to deliver when potential shame looms for a municipality.

Previously this community of between 2 000 and 5 000 people had a mere five toilets to use. This was wholly inadequate and unhygienic for such a large community.

The toilets were removed by the supplier when they were not paid by the municipality.

The insult to this Chintsa community by depriving people of toilet facilities is disgraceful and an affront to their dignity which should never have been allowed to happen.