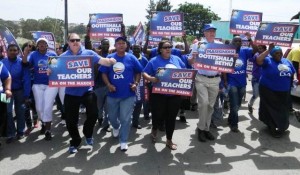 Bhisho MPLs Dacre Haddon and Edmund van Vuuren, DA Parliamentary Leader Lindiwe Mazibuko and Stuart Farrow (MP) led the “Save our Teachers”-march to the head office of the Department of Education in Zwelitsha on Friday, 9 November.

The DA has written a letter to Education Superintendent-General Mthunywa Ngonzo asking him to explain why he allowed about 100 Head Office employees to stage an illegal gathering outside the Department last Friday.

The employees left their desks and blockaded the entrance to the office precinct. They were attempting to prevent the DA from delivering a memorandum aimed at ensuring a teacher in every classroom.

Sadtu officials and Nehawu members wore T-shirts and sang derogatory songs. Many of these employees were likely to be middle to senior managers. How can they justify this unprofessional behaviour during working hours?

Given Mr Ngonzo’s failure to arrive to receive the memorandum, it can be reasoned that this gathering took place with his consent and possibly on his orders.

These officials were quite plainly staging an illegal gathering at the Education Department and then proceeded to intimidate DA supporters.

The DA wants to know from Mr Ngonzo whether he condones this illegal behaviour of his Union employees and whether there are any intentions from his side to institute punitive measures.

If no action will be taken, the DA wants to know why given that an unlawful gathering took place with the sole purpose of being disruptive and destructive.

The DA will also be asking a parliamentary question in this regard; as such criminal behaviour from officials who are paid to be at their desks serving the needs of our schools can never be condoned.