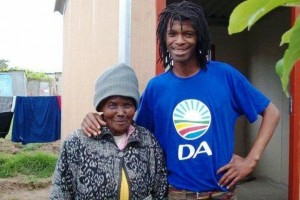 Bedford granny Mrs. Winnie Tukanye, who received a house within a week after intervention by DA MPL Dacre Haddon. With her is local DA-activist Michael Vece

Within days after intervention by DA MPL Dacre Haddon, a 95-year-old grandmother who had been waiting for a house for more than 16 years, woke up last Thursday to the sounds of a new house being erected in her yard.

According to DA councillor Cecilia Auld, Mrs Winnie Tukanye of Tjoksville in Bedford got washed out of her dilapidated old house every time it rained and sometimes spent days knee deep in water.  She is the sole provider for two young children.

“She came to me with an appeal for help last Monday as her previous requests made over the past few years had brought no results.

“On Monday evening I emailed a request to DA MPL Dacre Haddon, who took up her plight with the Department of Human Settlements.  By Tuesday lunchtime I was informed that an emergency house had been approved and that it would be erected by Thursday morning – which it was.

“This is a clear case of co-operation between politicians and local government working at its very best,” Auld said.

“The DA believes that everyone is entitled to live in a safe and secure environment.  She was absolutely delighted that her pleas had been heard and that she and her grandchildren can at last sleep dry.”