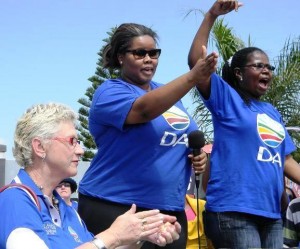 Swing to DA continues in EC

The Democratic Alliance in the Eastern Cape is on the march.  As the African National Congress slowly implodes so the DA continues to grow.  This week the former ANC Premier of the Eastern Cape, Nosimo Balindlela joined the DA.  This hugely significant event will continue to add to the momentum that is running in the DA’s favour.

This event comes on the back of the highly successful Democratic Alliance Student Organisation (Daso) victory in the Nelson Mandela Metropolitan University SRC elections.  There, Daso increased its vote from just over 50% to 75% in the latest poll.  Daso was recently registered at Fort Hare University after a long battle with the university to gain recognition.

These events are all pointers to the growing political realignment that is taking place in our politics. More and more voters are realising that it is a two-horse race between the DA and the ANC and are aligning themselves with the DA as a progressive force for change.

The DA in the Eastern Cape has always been a trend-setter when it comes to political realignment, and the latest move by Nosimo Balindlela is an indication of a growing swing towards the DA.

Poor service delivery, unspent funds, cadre deployment, corruption and the general lack of accountability are weaving a path of destruction.  The DA has a vision of the Eastern Cape as a province of rising opportunity where jobs will be created, crime will be reduced, service delivery improved and our roads network pothole-less.    This is a vision that will replace despair with inspiration, hopelessness with opportunity and inaction with change.

The build-up to 2014 has begun in earnest.  The power of your vote will make a real difference.