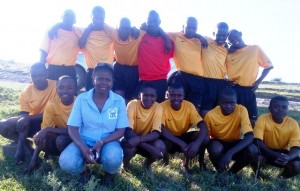 “It’s not always about politics.  Sometimes it’s simply about a gift to bring a smile to a bunch of kids,” MPL Veliswa Mvenya told Bhisho Brief this week when it emerged that she had bought soccer kit for the children of Qeqe, a rural village in the former Transkei.

“I visited Qeqe (Ward 12) in Butterworth in September and the hall was full of youngsters who cried out about shortage of playing facilities and that the ANC was caring for other areas of its own interest.

“These youngsters were being neglected, but they did not give up on playing soccer and they chose to stay away from criminal activities.

On Sunday, 11 November I handed the soccer kit to them. They could not stop smiling!   Their parents and the local pastor were also there to see for themselves the DA changing the lives of the children of their community,” she said.

“I purchased this soccer kit to put a smile on the faces of these children”.