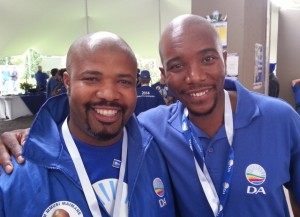 DA national spokesperson Mmusi Maimane (left) will be in Queenstown on Saturday. Pictured with him is Makashule Gana, DA Youth leader at the party’s recent congress.

The DA will be bringing in the big guns on Saturday to campaign for votes in next Wednesday’s (5 December) by-election in Ward 22 in Queenstown.

Mmusi Maimane, deputy federal chair and national spokesperson, as well as Nosimo Balindlela, former ANC Premier of the Eastern Cape, who joined the DA recently, will embark on a walk within the ward to a central point where they will address supporters and voters along with Eastern Cape provincial leader, Athol Trollip (MP) and deputy leader, Veliswa Mvenya (MPL).

The by-election is being held in Ward 22 after the death of the ANC-councillor.

Chris Hani District (Queenstown) constituency leader John Cupido (MPL) said:  “It has become clear that the community is tired of the empty promises made by the ANC government. Based on the positive reaction received from the community during our door-to-door canvassing and having leaders the quality of Athol, Nosimo, Mmusi and Veliswa speak to the people, we should win it.”