Freedom you can use 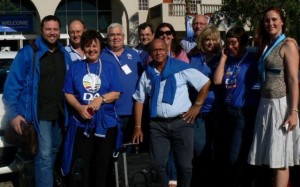 The theme of the Federal Congress held by the Democratic Alliance last weekend was “Freedom you can use”.  The party has emerged out of this congress clearly focussed on becoming the governing party of South Africa in 2019 and aiming to win two more provinces in 2014.

The ANC is imploding a lot faster than expected and in this climate one can expect an increased political space to open up for the DA.  This makes the prospect of political realignment that much greater.  The DA however, will not compromise its core values for short term political gain.  Defending the Constitution, an appropriately regulated market economy, non-racialism and an independent civil service can never be sacrificed on the altar of political expediency.

The new leadership elected at the congress reflects a generational shift with Mmusi Maimane (32) and Makashule Gana (29) elected to the position of deputy federal chairs.  This will ensure that the DA has greater appeal to the youth-vote which is fast emerging as a strong force behind the party

The DA’s vision of an open, opportunity society for all will provide hope for millions of South Africans who are in a state of despair.  A DA provincial government will create the right climate, thereby providing you with the opportunity to have the freedom that you can use – to get ahead in life and reach for your dreams.