MVENYA IS STAR PERFORMER OF THE YEAR 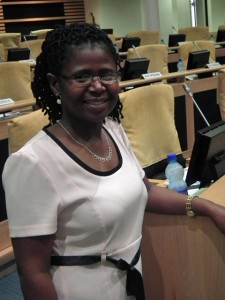 Eastern Cape MPL Veliswa Mvenya was awarded the Star Performer of the Year Award at last week’s DA National Congress, which is held every three years.  She was given the honour for going beyond the call of duty in her work performed in 2010.

Mvenya has been widely applauded, especially for her efforts in the former Transkei before the 2011 municipal election by establishing new branches and by continued political activities.  Thanks to her tenacity the DA grew its number of councillors in the area from 2 to 16.

Other recipients were Gary van Wyk for 2011 and Dylan Mitchell for 2012.  The Congress, attended by 1 600 delegated from around the country, was the biggest yet held by the DA.  It was held at the Birchwood Hotel in Boksburg.