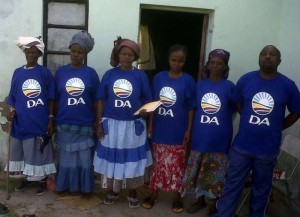 DA-councillor Gladwell Ntonjane (far right) is working hard to establish a second branch in the Peddie-area.

Plans are afoot to establish a second branch in the Peddie-area in the near future.

According to Amathole Constituency Leader Dacre Haddon (MPl), the enthusiasm for the DA has come about due to a targeted and strategic vegetable garden intervention that formed part of the party’s recent National Jobs campaign.

“This is an exciting development and bodes well for the future, as this area is fertile ground for the DA to gain support ,” Haddon said.

“Councillor Gladwell Ntonjane must be congratulated on this effort by building communities in Peddie,” he said.