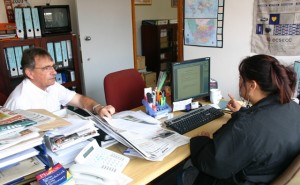 Below is an extract of a speech by Pine Pienaar, Shadow MEC for Roads and Public Work, on the annual report of the Department of Roads, which was delivered in the provincial legislature last week:

The Eastern Cape Department of Roads is robbing the people of this province of their basic right of mobility by not fulfilling its core function of maintaining our roads infrastructure.  Problems in this department highlight the broken chain of accountability that flows from MEC’s right throughout the provincial government administration.  Until there are consequences for poor performance nothing will change.

Over 2 075 kilometres of tarred roads in our province have been passed over to the national government (Sanral).  Yet this department cannot maintain the rest of our roads.  More and more farmers and communities do repair on roads in their vicinity themselves because they have given up hope of councils or the provincial government doing any form of routine maintenance.

Backlogs in road maintenance in the 18 years of democracy has resulted in a shortfall of R15 billion. This amount is increasing daily while the department sits idly by, doing nothing.

The lifespan of a road is 30 years – if it is maintained properly. However, many roads that are not even close to 30 years old are now beyond repair.  Potholes are so bad in this province that they are causing fatal accidents and in rural areas people cannot move from one place to another.  They cannot get to a town to shop or get to a clinic if they are sick or need medical advice.

The department’s in-house construction unit must be beefed up to put an end to outsourcing to parastatals where we don’t get value for money.  The contract with Coega Development Corporation must be reconsidered and must be terminated in the next financial year.

This contract does not benefit the province and its roads infrastructure.  In the 2011-12 financial year, R483 million was transferred to the Coega Development Corporation for road maintenance in this province.  Poor workmanship and non-supervision was the order of the day and the output of road maintenance was very poor.

We need to spend the money on infrastructure, not on consultants assisting consultants.

This Department received a qualified opinion from the Auditor General for 2011/12.  Matters highlighted by the AG were:

Despite these transgressions, the department paid 650 employees a pay-extravaganza of more than  R6 million in performance bonuses.

Clearly, this department is not functioning.  The DA again repeats its call that officials responsible for the negative achievement of this department, from the MEC to the most junior clerk, face the consequences of their underperformance.

Freedom of mobility should be prioritised within communities.