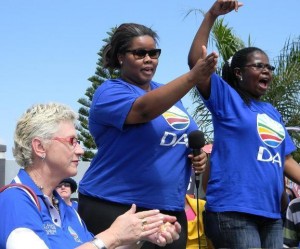 Provincial spokesperson and MPL Veliswa Mveyna (right) at the recent DA-march to the head office of the department of education, with parliamentary leader Lindiwe Mazibuko (middle) and DA Shadow Minster for Basic Education, Annette Lovemore.

It gives me great pleasure to report that among the issues I have driven this year there are two that are very important and of which I am extremely proud.

The first is the matter of social workers who graduated last year and could not be employed, due to a budget shortfall.  I took it upon myself to make noise whenever I got an opportunity:  with the department, in committee meetings and in the House, harping this issue.  This resulted in the adjustment appropriation of R7 million in the 2011/12 budget for the appointment of these social workers. They will all be appointed; I have also confirmed this with the official responsible for the programme dealing with social workers.

The second issue is that of the repealing of the old Fort Cox decree, dating back to the former Ciskei government.  This matter has been in the news for a long time, frustrating lecturers in that institution.  I also took it upon myself to drive this issue.  I put out a media statement, I discussed  it in committee meetings and in the House and I tabled a motion in the legislature.  I am delighted and proud to report that early next year we will debate a bill in the legislature to repeal this notorious decree.

I will continue driving issues for the betterment of the people of this province to show voters that we as the DA can do better as government, should they give us that chance.

Where the DA governs, it governs well.   We are a force for change.

On behalf of the DA caucus in the Legislature, I wish you a prosperous New Year and safe holidays.