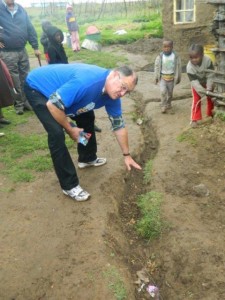 Shadow MEC for Local Government, Dacre Haddon (MPL) inspects a makeshift trench used to lead sewage away from the homes of residents in the Zolani informal settlement with Grahamstown.

The Human Rights Commission has acknowledged receipt of a request by myself, on behalf of the Democratic Alliance, for an investigation in all areas in the province where there are settlements with no toilets.

A shocking one in eight households in the Eastern Cape does not have a toilet.  I have been visiting communities around the province and after seeing the appalling way in which people are forced to live, it is clear that there is a need for a minimum standard when it comes to sanitation.

The Commission informed me that the matter has been referred to the Provincial Manager for assessment in order to determine whether a human right has been violated; whether the Commission has jurisdiction to investigate the matter; whether it should be referred to or could be dealt with more effectively or expeditiously by another organisation, institution, statutory body or institution created by the Constitution or any applicable legislation or whether the complaint should be accepted on the grounds that it contains a prima facie violation of a human right.

If it appears that a human right has been violated, the matter will be forwarded to the Legal Services Programme for further investigation.

I trust that this is the first step towards making a positive impact to improve the standards of living in informal settlements.