MESSAGE FOR 2013 FROM THE LEADER, BOBBY STEVENSON 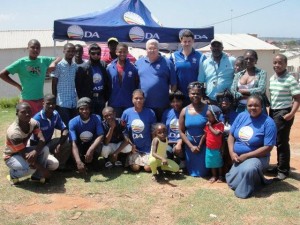 When we make a difference we create hope

Many people are trapped in the abyss of despair, not believing that their circumstances can change for the better.  I think of the millions of people in our province who are locked into a cycle of poverty, the learners who suffer at the hands of a poor education system and those battling to access decent health care.  All of us live in fear of the criminal element and unwittingly accept these high crime levels as normal.

This does not have to be the future.

In our individual capacities we can impact on the people around us by trying to change their circumstances.  It might be a simple gesture, such as paying for a learner’s stationery whose parents find it unaffordable, helping someone access a bursary or assisting someone with a health care problem that they might not have been able to solve.

The Democratic Alliance public representatives at all levels also take up the plight of individuals and have many successes in this regard.

While individual efforts are laudable and create hope in the lives of those that have been touched by these gestures of goodwill, we fundamentally need a change of government if we are to reshape our society and put it on a winning streak.

This means the DA, as the only alternative to the ANC, must vigorously continue to champion the ideals of an open opportunity society and where in government apply them in practice.  When people see the DA making a difference it gives them hope for the future, hope that their circumstance too can change.

Ultimately you can be a difference maker by ensuring that you and your friends are registered to vote and support the DA as the party of change.  The year 2013 is about creating hope for South Africa and you can play your part too.