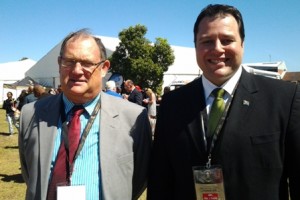 Colleagues…DA MPLs Dacre Haddon (left) and John Cupido at the 2013 State of the Province Address at the Bhisho Legislature.

Madam Premier we congratulate you on the many economic initiatives you mentioned in your Sopa address that will bring future economic prosperity to this province.

Project Mthombo with the Chinese oil company Sinopec’s possible production of 300 000 barrels of oil a day, at the new planned refinery, is exciting news for all of us.

The focus of this speech is how the importance of public perception of performance of local government directly influences economic development and job creation in municipalities.

The Honourable Chief Whip in his speech to this Legislature on Tuesday lamented as to why the reputation of the Eastern Cape is not being recognised.

One of the main reasons for this is because of the general negative public perception of the state of affairs in this province.

We note in the Premiers speech regarding public sector transformation and the culture change programme in her government that people are going to be placed first.

This is a great initiative and worthy of all our support.

This good work is then negated by the public perception and media reports that the Province hosts a “Vuna awards” ceremony for municipal excellence when not a single municipality in the province had received a clean audit in the last financial year!

In your speech you state you are on course to achieve clean administration.

If this is to obtain clean audits by next year then there is a tall mountain to climb Madam Premier.

To illustrate this point I quote two statements from the Daily Dispatch ‘Blog Chirps’ of 27 February 2013:.

In the title “MEC to Honour Councils” Ngcobo Boy stated and I quote: “these awards should be suspended pending all these councils cleaning up their acts. The MEC must have enough balls to halt this process and be honest with the people of this province”

In another quip Siseko N writes: “A waste of taxpayers’ money. I wonder what is there to award when services are not improving”.

So often the good work done by government is then immediately negated by a perceived negative action from province.

Honourable Speaker, in the section of the National Development Plan titled “Enabling Milestones”, there are two aims pertinent to services delivery:

The first is to ensure that skilled, technical, professional and managerial posts better reflect fairer racial, gender and disability in these posts.

The second is to realise a developmental and capable and ethical state that treats citizens with dignity.

The Democratic Alliance fully supports the NDP and looks forward to reaping the successes of the plan with you in 2030.

However Speaker, this NDP will only happen if the Premier and her planning commission take serious action in developing a compelling positive perception of this province.

It is acknowledged that much has improved and been achieved to improve the lives of citizens since 1994.

However, the curse of corruption, cadre deployment, unspent budgets, incapacity and poor work ethic dominate the public discourse because this is what the public at large experience on a daily basis.

It has been stated on many occasions by Ministers, MEC’s and in the media that the government is curbing corruption. We know this is being done but the perception in the public domain is that not enough is being done to curb corruption.

So in order to improve perceptions in the province why do we not consider some kind of regular report or statistic informing who has been promoted, transferred, redeployed, suspended, criminally charged for corruption?

We hope that your planning team can create the magic to revive the reputation of this province.

Let us hope that this Provincial Planning Commission is not another ‘talk shop’ of great ideas with no implementation.

What this province needs is a positive branding strategy for all our districts and municipalities.

However, branding does not just happen or get believed or accepted by citizens overnight.  Branding only comes at the end of the revitalisation/repair process when citizens are content, employed and enjoy efficient municipal and stable municipalities.

Fix the basics in municipalities and the rest will follow.

When this is done then the Eastern Cape will really be a ‘compelling place to live work and play’.