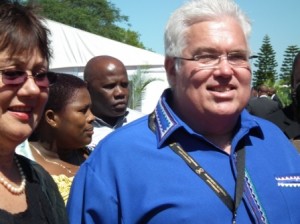 The provincial economy is not adding jobs. We need to create circumstances that will put this province on a new path to prosperity and service delivery.

Although the list of projects announced [by the Premier] is welcome the reality is this province lost 69 000 jobs in the last quarter of 2012 and year- on-year the loss was 65 000. The Eastern Cape suffered the highest job loss of any province. Our unemployment rate now stands at 29,8 while the expanded definition figure is now 46,1%. Over one million people are without work.

The DA is in broad support of the National Development Plan but the Premier failed to endorse one of its proposals, a youth wage subsidy.

The youth of our province are the hardest hit when it comes to unemployment. Young people face the greatest challenge because of their lack of skill and experience required by employers. If you lower the cost of hiring young people by means of the youth wage subsidy there is an incentive to do so.

The Western Cape government has been chosen by the National government to pilot three crucial areas under the NDP.

The Western Cape Government has added a fourth component which is its version of the youth wage subsidy that will give young people a foothold on the ladder of the economy.

These ideas are rooted in the NDP’s understanding that the government is not a job creation agency. Rather it must create the environment that attracts investors who start businesses and create jobs.

Part of that environment is the right policies, good infrastructure, service excellence and an educated and skilled population. This is what attracts entrepreneurs.

Before quality education and other aspects of service delivery can become a reality those responsible for derailing it need to be brought to book.

In the 2011 Sopa the Premier stated that the problem of additional teachers would be sorted out within six months. It is now almost two years later and the cost of this inaction is in the region of R1,8  billion per annum for the 6 500 surplus teachers.

The Premier failed to announce any consequences for those managers responsible for the continued under expenditure in this province. Conditional grants are projected to underspend by R1, 015 billion in this financial year.

She failed to announce any consequences for those mangers responsible for not paying businesses within thirty day.

She also failed to announce measures that will be taken against civil servants who continue to trade with the province in violation of your policy.

The government needs to usher in a new era of accountability so that those who continually fail this province face consequences.

This is particularly so in the area of local government where no municipalities received clean audits in the 2011-2012 year. As she honestly pointed out in a speech these are battle grounds for accessing state resources perpetuating corrupt activities.

With bold leadership and innovative policies this province can start a new journey and be the place we all dream of.  Madam Premier, crack the whip.