STEVENSON PROUD OF ROLE IN FIGHTING APARTHEID: THE HERALD 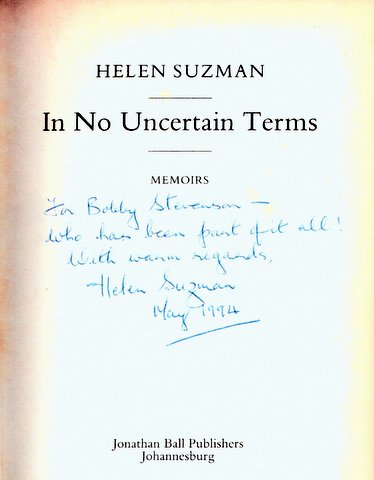 THE article, “Divides evident at May Day rallies” (May 2), in which ANC national executive committee member Lynne Brown states that voting for the DA will bring back apartheid, shows the desperation in the ANC towards the growing DA electoral threat.

It is a ridiculous suggestion to think that the party of Lindiwe Mazibuko, Joe Seremane, Patricia de Lille, Mmusi Maimane and millions of other black South Africans who support the DA would be working to bring back apartheid.

As a leader in the DA, I am very proud of the role we played in fighting apartheid.

As Port Elizabeth’s youngest councillor in the late 1980s, I fought hard to rid the city of apartheid and usher in a new democracy.

I worked very closely with people such as Molly Blackburn, who was a Progressive Federal Party public representative at the time.

There are numerous public buildings and a committee room in the provincial legislature named after her.

At Nelson Mandela’s first welcome home rally held in Motherwell in 1990, where I was present after I earlier had enjoyed a private meeting with him, he devoted the first part of his speech to a tribute to what Blackburn did to fight apartheid and expose injustice.

She was a great and wonderful woman, who fearlessly spoke out when others were too afraid.

She and people like Helen Suzman, who I also knew very well, were staunch campaigners for a free and democratic South Africa.

I still treasure Helen’s words to me, inscribed in her book in 1994, where she thanked me for being part of it all.

There is now a desperate attempt to airbrush out the role that members of the DA’s predecessor parties played in fighting the brutality of apartheid.

We can never forget apartheid and its ongoing consequences, nor must we conveniently forget the role that non-ANC members played in fighting it.

Scare tactics are now being utilised to shore up the ANC’s shrinking support base.

The principles of the DA going all the way back to the 1960s have stood the test of time.

They are the basis of winning nations who are free, prosperous and just.

The struggle for a free and just South Africa continues.

Leader in the Legislature, Bhisho