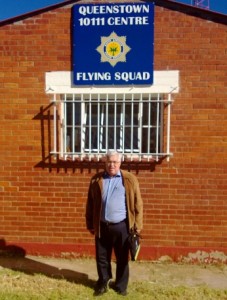 Bobby Stevenson visited the 10111-centre in Queenstown recently as part of an oversight visit by the Portfolio Committee on Safety and Security to police stations in the province.

Speech notes by Bobby Stevenson DA Chief Whip, speaking in the Eastern Cape Provincial Legislature on the budget for the Department of Safety and Liaison – 18 June 2013.

The Democratic Alliance welcomes the increase in the budget of Safety and Liaison of 10, 53%. This is one of the biggest departmental budget increases. With an increase of this size comes the added responsibility to ensure that these funds are put to good use in carrying out the core business of the department. There is no doubt that the department is well administered, holding the provincial record for the number of unqualified audit reports in a row. But doing things right and doing the right things are two vastly different concepts.

If one looks at the state of policing in our province and the high crime rate I am not satisfied that the department is carrying out its mandate as enshrined in section 206(2) of the constitution which inter alia empowers the province to monitor police conduct, oversee the efficiency and effectiveness of the SAPS including the effectiveness of visible policing.

I am also not satisfied that the Department fully understands the full extent of provincial powers which were upheld in the recent court case in the Western Cape. Schedule 4 of the Constitution specifically lists policing as a concurrent power to the extent allowed by Chapter 11. The department is given specific powers to determine whether or not the SAPS are fulfilling its responsibilities.

The fact that we never see these reports is an indictment on the department’s ability to carry out its core mandate. Instead of being at the forefront of ensuring that the efficiency and effectiveness of the SAPS is improved, it plays a background role and keeps the committee in the dark. Your department is failing to hold the SAPS to account thereby failing in playing a pivotal role in reducing crime in this province.

According to the 2012 Victims of crime Survey, our province has one of the highest percentages of households (40, 6%) who will not see a policeman on duty in their areas. This alone should get the alarm bells ringing when it comes to the effectiveness of visible policing.  (Eastern Cape (40, 6%), Mpumalanga (22, 2%), and KwaZulu-Natal (13, 8%).

Has the Department interrogated this report and discussed its implications for policing in the province?

High visibility policing not only helps to reassure the public but is also a deterrent to criminal activity. The cry from communities is the lack of visible presence by the SAPS.

In one’s dealings with the public and travelling around the province, a key issue is always brought to one’s attention and that is the lack of visible policing and the shortage of vehicles. From Mthatha, East London and PE the problem is widespread.

It is not only the shortage of vehicles  that is the problem but the  long time it takes to repair them  as well as delays in obtaining financial authorisation.

Earlier on this year I met with Walmer Township residents. They are dissatisfied with the high rate of crime in Walmer Township. They complained that there was only one police vehicle driving around at night. A visit to the station confirmed that this was true. This is due to the shortage of vehicles and manpower. This is an example of areas that has undergone rapid population growth without an increase in police resources.

But according to a question I asked the MEC, Walmer actually has a surplus of three vehicles allocated to the community service centre. If I told that to the community they would howl at me.

Another area that has undergone rapid expansion where there was recent unrest was the Booysen’s Park area of Port Elizabeth where protests started relating to the high crime rate in the area.

There is a definite need for another fully fledged police station in the Bethelsdorp policing area. I welcome the Provincial Commissioner’s recent commitment to establish a satellite in the area but this can only be a short term measure.

Incidents of unrest are on the increase in the Eastern Cape. According to the latest report on crime stats the number of protests that were reported to the SAPS increased from 63 in 2010/11 to 101 in   2011/12. This is an increase of 60, 3 % and is the second highest in the country.

SAPS does not  have sufficient  crowd control  members to  deal with all the unrest situations in our province,  resulting in members  having to be taken off crime prevention duties.  I would like the department to investigate the capacity of SAPS to handle unrest situations to ensure there are programs in place to train additional members.

The Department needs to take note of the rising tide of dissatisfaction when it comes to the  high rate of crime in this province and pull out all stops to ensure  the SAPS is operating  efficiently in reducing crime  and making communities feel safe. It needs to review how it goes about its core business and develop a fresh approach in line with its Constitutional obligations.