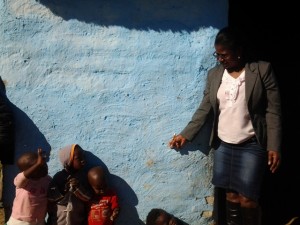 Veliswa Mvenya with a child-headed household in the Danti Administrative Area in Mount Ayliff, who live in a mud-rondawel without a proper roof.

The DA will continue to expose incidents where high ranking members of the ANC are seen by communities to be benefitting from state schemes while the poor remain last in line.

During an outreach visit in May to the Alfred Nzo District Municipality I was shocked when I saw families living in houses with no roof and who go to bed on empty stomachs.  I met a child-headed family of six kids liveing in a small rondavel with no windows and no food to eat.

I almost collapsed when I saw Umzimvubu Mayor Khulukazi Phangwa’s modern home with two RDP-houses built on the property.

I submitted legislature questions to the MEC for Human Settlements, Helen Sauls-August, to explain how it came about that two RDP-houses were built on the mayor’s property.  If the mayor had been involved in any corrupt dealings concerning housing in the area, it had to be exposed.

In reply to questions about the houses, the MEC for Human Settlements, Helen Sauls-August, stated that the two RDP houses were not allocated to the mayor.  Instead two of her sons had applied for housing, which was approved.  Apparently the houses are within the same boundary fence, but are on a different plot, “hence they seem to be in the same plot”.

She continues that “the two sons followed the procedure when applying and the subsidies were approved in their names and not in the Mayor’s name.

“At this stage the Department has not identified any wrong doing regarding this mater for the Mayor not any departmental and/or municipal official,” the MEC said.

This incident underlines the fact that ANC-friends and family are the ones who benefit most from state resources.

Mrs. Phangwa is the mayor of one of the poorest districts in the country.  Umzimvubu is part of the Alfred Nzo District Municipality which was last year found to have the highest poverty rate in the country, at 83, 2%, by the South African Institute for Race Relations.

She stands accused within her community of being selfish and corrupt and grabbing services for herself.

I have written to the Public Protector to request for an investigation into the allegations.  If they are true, the mayor should be fired, prosecuted and jailed.

We cannot allow that the scourge of corruption and self interest continues while the poorest of our people are left out in the cold.  I will continue to expose this type of nepotism, lack of governance and weak controls.