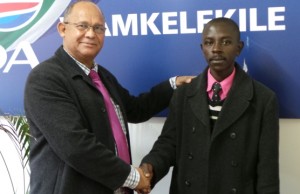 Glad to help…Edmund van Vuuren MPL and Loyiso Tunyiswa, who will be given the opportunity to become a teacher, thanks to intervention by the DA on his behalf.

Loyiso Tunyiswa’s life is finally on track after an intervention by the DA’s Edmund van Vuuren.

Tunyiswa had been fighting for 11 years to get the Department of Education to correct a spelling mistake on his matric certificate.  Because of the mistake he was unable to enrol in a tertiary institution to further his studies.

DA Shadow MEC for Education Edmund van Vuuren took radical action during a recent portfolio committee meeting, by personally taking Tunyiswa into the meeting to see Education MEC Mandla Makapula.  The MEC committed himself to helping Tunyiswa enroll at university and then employ him as a teacher or social worker.

The Daily Dispatch reported on Tunyiswa’s problem in 2010 and subsequently he did receive the correct certificate. This was after he had been sent from pillar to post from 2000 after he received his matric certificate with his surname incorrectly spelt.

Tunyiswa was a teenager when he matriculated from Forbes Grant Senior Secondary School in Ginsberg.

“I just want to further my studies in social work or become a teacher.   I don’t have financial resources to sue the state but I need them to help me because this has caused a lot of problems not only for me but my family. I want my life back,” Tunyiswa said.

Van Vuuren said he was happy for such a positive outcome and will keep in contact with Tunyiswa to monitor his progress.