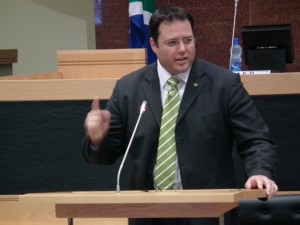 Following an oversight visit by George Boinamo, DA Shadow Deputy Minister of Cooperative Governance and Traditional Affairs and Eastern Cape Shadow MEC for Health, John Cupido, to the Mthatha General Hospital on July 8, the statement below was  issued:

Yesterday afternoon, together with my colleague in the Eastern Cape, John Cupido MPL, I conducted an oversight visit at Mthatha General Hospital to ensure that all those who have been victims of botched circumcisions are receiving adequate medical care and support.

Few words can be used to explain what we witnessed. I was left shocked and angered by what can only be explained as the inhumane butchering of our sons.

The medical staff at the Mthatha General Hospital showed us the wards packed with young men who were in excruciating pain after having their penises severed by irresponsible, untrained and illegal initiation practitioners.

In one particular case, a certain young man’s penis had just fallen off while another was barely alive as doctors predicted that he may not survive the injuries sustained.

On having a conversation with the staff at the hospital it became clear that the overwhelming majority of these incidents have not resulted in arrests. This has been a trend in previous years, when this crisis repeats itself.

It is unacceptable and an insult to justice that while over 30 of our children have died in this crisis in the Eastern Cape alone, and over 300 people have been hospitalised, reports indicate that only five people have been arrested.

On hearing this news, I spent yesterday afternoon attempting to contact the South African Police Service in the Eastern Cape to get further information about arrests still to be made and the status of investigations. I also tried to call the Eastern Cape Provincial Commissioner, Celiwe Cynthia Bitha’s office. In all attempts, I was not able to get a single update and I was simply referred to different offices with no success.

We need prompt and effective action from the SAPS on this crisis. The question which must be urgently answered by the Minister of Police, Nathi Mthethwa and the National Police Commissioner, Riah Phiyega is why have there been so few arrests despite the number of victims continuing to rise? It is also unclear as to what efforts have been taken by SAPS to shut down illegal initiations schools, and how many of these schools have been shut down to date. This silence must end.

I will therefore write to National Assembly House Chairperson Cedrick Frolick requesting he grant permission for the Chairperson of the Portfolio Committee of Cooperative Governance and Traditional Affairs, Dumisile Nhlengethwa, to call back all members of the committee from recess for an urgent meeting on this crisis. Specifically, the Minister of Cooperative Governance, the Minister of Health, the Minister of Police and the National Police Commissioner must be summoned to explain why, despite this crisis being publicly known for some time, such little action has been taken.

Indeed, the promises made by the executive during the snap debate in Parliament on initiation deaths seem to be merely lip-service. This cannot be tolerated.

The time for promises is over; action is now needed so that we can save lives.