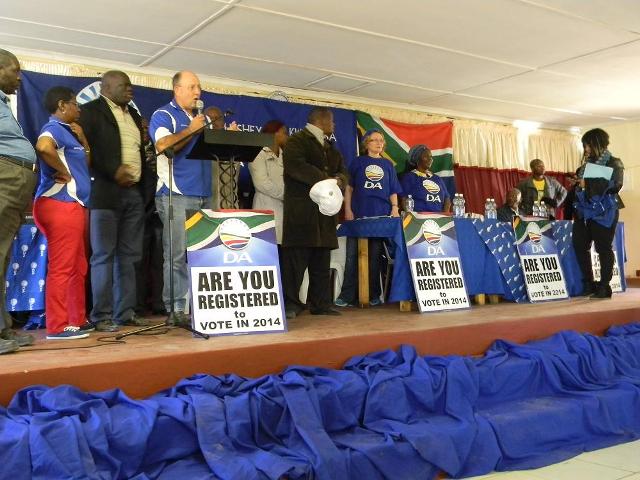 A membr of the ANC can be seen on the stage on the far right of this picture, taken during a DA rally in Ngqeleni on Saturday, 21 September. Memebers of the ruling party attempted to disrupt the meeting by marching to the hall, getting onto the stage and making allegations of violence against them by DA members.

The Daily Dispatch reported that tempers flared shortly before Zille and her entourage arrived at the Apostolic Faith Mission (AFM) in Mncane village.

Ward committee member Nontobeko Nxalase claimed she had opened a case of assault and attempted murder with police on the scene.

She claimed she had been manhandled and allegedly had a firearm pointed at her by two DA members she did not identify.

But Zille dismissed the claims as “nonsense”.

“They must prove the allegations and explain why they did not report it to the police there,” she said.

Mthatha police spokesman LieutenantMzukisi Fatyela said he could not confirm that the matter had been reported to the police.

Soon after the alleged incident, a rowdy group of about 20 ANC supporters tried to force their way into the church while Zille was addressing around 450 supporters.

The ANC members claimed they had exclusive use of the church as an assembly point for its election volunteers doing door-to-door work.

However, DA chief whip in the Alfred Nzo District Municipality, Bandile Mbewe, said the ANC was blatantly trying to create chaos in order to disrupt the DA gathering.

Mbewu said the church told them the ANC only used the church between Mondays and Fridays.

Wearing a torn T-shirt with President Jacob Zuma’s face printed on it, Nxalase told the Daily Dispatch that DA members, whom she could not name or point out, had accused her of organising young boys from local taverns to disrupt the event.

“They demanded to know my name and I told them I don’t have one. Then the (DA) man said: ‘ How come you don’t have a name’.

“Then he punched me in the neck and another woman throttled me when I fell down,” she said.

She did not show the Dispatch any weals or marks.

Heavily-armed police defused the tense engagements between leaders of the opposing sides and despite calls from the AFM’s Reverend Theo Cebani to cancel the DA gathering, it went ahead.

Inside, a defiant Zille told supporters that while the ANC was trying to create “no-go areas” in South Africa, her party would campaign “everywhere until the last corner of the country (is reached)”.

“We won’t be chased away because we’ve got to build a multi-party democracy. If we run away from our responsibilities we will be failing even ANC supporters,” she said.