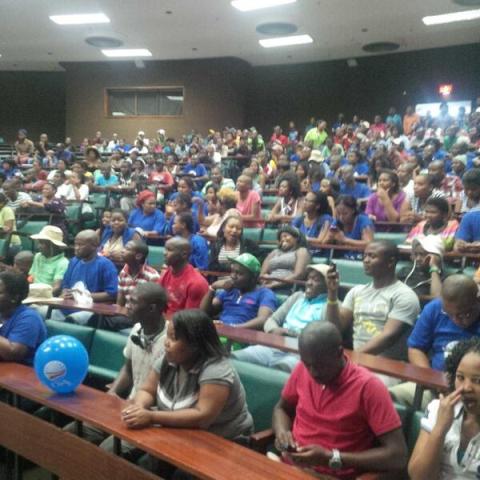 Full attendance at Daso’s meeting on the Alice campus of Fort Hare University before the meeting was sabotaged by members of Sanco/ANC on Thursday evening, 3 October.

DA LEADER Helen Zille was prevented on Thursday evening (3 October 2013) from addressing hundreds of University of Fort Hare students and party supporters after what she referred to as a “clear indication of desperation and sabotage”, the Daily Dispatch reported.

Zille was scheduled to deliver a lecture at the historic university’s Green Auditorium but her speech was cut short before it even started.

This was after power went off in the venue, leaving the DA leader to briefly address those in attendance outside the venue before she was whisked away by her security team.

The auditorium was the only building affected by the power outage.

The drama began before Zille arrived at the venue when a group of ANC-aligned SA Students’ Congress (Sasco) members attempted to take over the venue, which had been booked by the Democratic Alliance Student Organisation (Daso).

As Daso members were decorating the venue in anticipation of Zille’s arrival, a group clad in Sasco regalia, stormed the hall with their PA system while hundreds of others waited at the venue entrance.

When confronted by Daso members, the Sasco group claimed to have also booked the venue and were preparing to be addressed by Sasco president Andile Gama.

However, after brief talks, the Sasco group vacated the venue for the nearby Orange Auditorium to loud cheers from hundreds of DA members who had packed the Green Auditorium, including former Eastern Cape premier and now DA activist Nosimo Balindlela.

The two student organisations are fierce rivals for the student elections scheduled for October 10 after being postponed a numerous times for various reasons.

After being addressed by their student leadership Zille, who had previously joined the students in dance and song, took to the podium to deliver her lecture themed “The new struggle starts here” .

She was to outline challenges faced by South Africa now and how she thinks those could be addressed.

Just as Zille was making her opening remarks reflecting on the history of the institution, lights unceremoniously went off, resulting in Daso supporters vacating the premises.

Zille then decided to climb on top of a bakkie outside the venue and used a loud hailer to address the students.

However, that was not to be as the loud hailer also failed to function.

As the Daso group gathered around Zille for an outside address, a group of Sasco members gathered nearby hurling insults at DA members and singing loudly to disrupt Zille from speaking.

Physical confrontation between the two groups was prevented by the presence of security including the state’s VIP protection unit which kept a close eye on proceedings.

Speaking to the DailyDispatch afterwards, an agitated Zille said the acts of political intolerance at the university, were tragic.

“This is very sad indeed to have happened at this great university from which five former presidents of different countries around the continent has studied.

“This is the heart of democracy in our country, but now it has been reduced to this amount of intolerance and undemocratic behaviour,” an emotional Zille said.

Attempts to get comment from Sasco representatives and university management proved fruitless at the time of going to print. — Asanda Nini