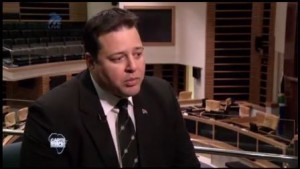 Caption: DA Spokesperson on Health John Cupido during his recent interview on Carte Blanche highlights the issue of surgical backlogs in the province

Gavin Rusteberg approached me for assistance with a double hip replacement that he needed done at Frere Hospital. However due to the long waiting list he could wait anything between 3 – 5 years. I then wrote a Parliamentary question to the Eastern Cape MEC of Health to ascertain the extent of the list and if the department has a prioritization policy as some cases are more serious than others.

I also asked Carte Blanche to consider doing Gavin’s story as part of the Eastern Cape Health exposé which they agreed to do and which was recently screened. Thus far no action has been taken from the Health Department’s side.

“The DA’s efforts are in exposing the department’s failures in healthcare service delivery, putting a face to those that they ignore and using mainstream media to show the plight of the patient”.