MESSAGE FROM THE LEADER, ATHOL TROLLIP 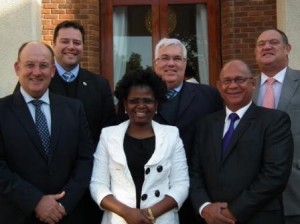 The recent Ward 5 by-election in the Nelson Mandela Metro which was caused by the resignation of DA councillor Jeremy Davis was an important bellwether election to determine whether the DA support in the Metro is still on an upward curve.

The wonderful election fought by Councillor Morné Steyn with his magnificent campaign team led by David Hayselden and Bobby Stevenson indicates that the DA is regarded as a realistic alternative to the floundering ANC in the Nelson Mandela Metro.

Ever since the DA lost the Kouga municipality due to floor crossing, we have been unable to regain an outright majority due to non ANC supporting voters splitting their support between the DA and other smaller political parties. This has played into the hands of the ANC and has allowed them to mismanage and mal-administer this municipality to the detriment of ratepayers and voters. The two by-elections in ward 9 in Humansdorp and ward 5 in Hankey are a golden opportunity for the ratepayers and voters of these wards to deliver Kouga back to the Democratic Alliance where we will turn it around into once again being an award winning municipality with reserve funds in the bank.

These two by-elections will require “an all hands on deck” endeavour from all of us in the province and we are most encouraged by the support we are receiving from national leadership figures, National Head Office and our Western Province provincial counterparts. Elza van Lingen and Donald Lee who are spear-heading this campaign have been hard at work ensuring that “all hands are on deck”

Winning these by-elections will allow us a unique opportunity to win the municipality between elections.

The by-election in ward 2 in Mnquma will be championed and led by Veliswa Mvenya and we will do everything we can to try and win this ward. If we are unable to secure a victory, we want to do what we can to use the result as an indication of what kind of support we can anticipate from ANC dominated rural wards in the former Transkei.

Successful elections are always ensured by momentum that is generated in the build-up to those elections. All of the above by-elections thus play a very important role in generating political momentum for the DA in the Eastern Cape prior to our most important elections ever.

I know that I can count on every single public representative and activist to do what they can to help us achieve our objectives in these forthcoming by-elections.

The same applies to any other by-elections that we might contest between now and the 2014 elections because we cannot afford any hiatus in our momentum.

Let us lead the way forward!

One comment on “MESSAGE FROM THE LEADER, ATHOL TROLLIP”