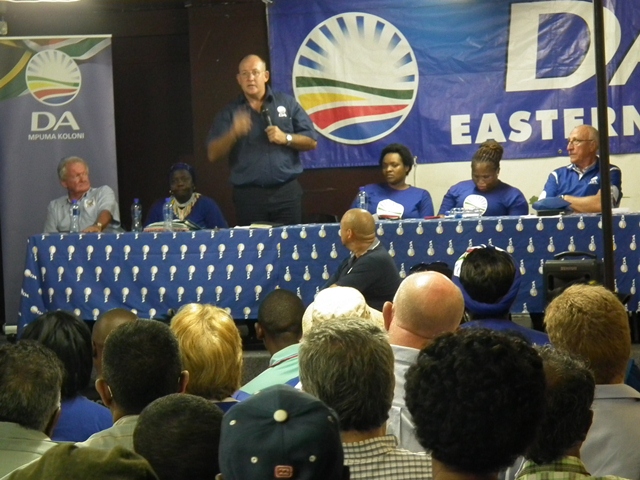 THE DA in the Eastern Cape is leaving nothing to chance ahead of by-elections in Buffalo City Metro and Mbhashe early next week.

This was shown when the DA packed the Turnbull Park Club hall in East London to listen to their provincial leader Athol Trollip.

Trollip told the supporters they needed to make sure they retained the ward in BCM.

The vacancy opened when the DA fired its ward 3 councillor, Sandla Manciya, for poor performance.

Trollip told the crowd that his party would use the by-elections in BCM and in Mbhashe, where they will contest five wards, as a barometer of how the DA would fare in the upcoming general elections later this year.

He then took a swipe at the ANC, and how they had failed the people of South Africa and BCM.

Accompanied by DA ward candidate Patricia Williams, Trollip explained how the ANC has failed the youth of the country.

“The youth are unemployed. The ANC has done a lot but this is not enough when most of people are still suffering,” he said.

He also took a swipe at BCM on the taxi scandal involving transporting people to Nelson Mandela Memorial services.

“That person who received that money is their comrade,” he said.

She told the crowd she had actually become joining the party.

“I took an independent stance that enough was enough … I can no longer stay where I was,” Balindlela said.

She took a swipe at President Jacob Zuma’s Nkandla home, asking: “How can you spend so much money on one house when your own neighbours are suffering?”

In Mbashe 12 wards are up for grabs on January 29.

The ANC will face off against the DA, COPE and UDM in some of the wards.

The Mbhashe by-elections follows the recall of 12 ANC ward councillors who were part of a group of 16 expelled by the party for misconduct early last year.

Four of the 16 were proportional representative councillors, and have since been replaced.