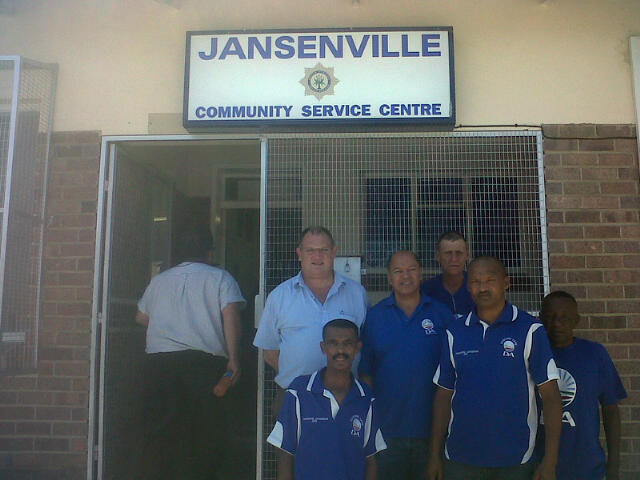 Dacre Haddon MPL and DA Shadow MEC for Local Government (left back), Donald Smiles MP and Constituency Leader in the Karoo Midlands middle) and a delegation of DA activists including Ikwezi councillor Johnny Lewis outside the SAPS offices in Jansenville.

The DA today laid criminal charges against the Mayor, Municipal Manager and the Legal Advisor of the towns of Jansenville and Klipplaat.

Under the watch of Mayor Sizwe Mngwevu, Municipal Manager Tembani Gutas and Legal Advisor Chantel Williams the Ikwezi Municipality is effectively bankrupt. The Auditor-General has issued the municipality with a disclaimer for the 2012/13 financial year.

The progress that was made in this municipality has been replaced under the ANC of President Jacob Zuma with wasteful expenditure instead of jobs opportunities.

The DA will cut corruption to create jobs. By so doing the DA opens opportunity for all to have access to dignified employment. This will lead us together to create financial security for individuals and families.

Some of the findings by the AG include:

2. Unauthorised expenditure of R2,1 million plus an additional R2,5 million that was not disclosed due to overspending of the budget per vote;

3. Conditional grant funds being used for other expenditure not in terms of the grant;

4. Expenditure incurred in excess of the limits of amounts provided for in the votes of the approved budget;

5. Quarterly reports not being submitted to the council on the financial affairs of the municipality; and

6. Insufficient evidence that monthly budget statements were submitted to the mayor and provincial treasury.

Ikwezi councillor Johnny Lewis has laid the charges on behalf of the DA in terms of Section 173 (1) and (2) of the Municipal Finance Management Act for Unauthorised, Irregular or Fruitless and Wasteful expenditure.

The DA will not allow progress to stall due to mismanagement.

The DA delivers where it governs. We can bring about change.