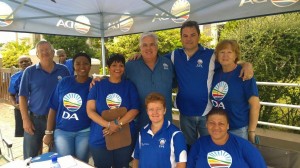 A triumphant win in the Ward 3 by-elections held in East London, saw the DA retaining its seat

The Democratic Alliance contested five wards in Mbashe in the final week of January. These include wards 5, 10, 15, 29 and 30.

We achieved significant growth, particularly in ward 5 where we polled 530 votes whereas in the last by-election held in 2011, we polled less than 20 votes.

The by-elections came about as a result of 12 ANC councillors that were expelled for “misconduct”.

Voters have expressed unhappiness towards corrupt government officials, a lack of strong political leadership and slow service delivery. Our commitment to the people of South Africa is to grow our economy by creating sustainable jobs and to deliver on our promise of quality services.

The Democratic Alliance has retained its seat in Ward 3 in Buffalo City following a significant increase in its share of the vote from 53% in 2011 to 82, 26%.

The by-elections which were held on Wednesday, 29 January 2013, follows after the DA fired a non-performing councillor.

This indicates a serious measure of accountability in upholding clean governance in the Province. The ANC meanwhile has lost support dropping from 38% to 17, 66% in their number of votes received since the last by-election held in 2011.