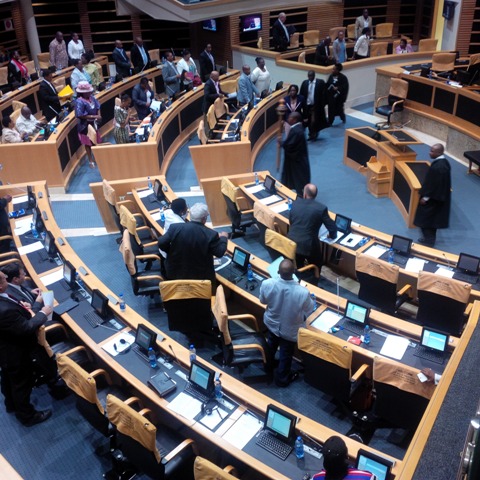 The Eastern Cape Provincial Legislature sat on Tuesday for the first of a two-day debate on Premier Noxolo Kiviet’s 2014 State of the Province Address.

Hon Speaker, Hon Premier, members of the executive, members of this House, officials from different Government Departments, dignitaries and invited guests. It is a privilege to respond to the State of the Province Address.

Hon Speaker, some stories were told and some may believe that those stories are good stories. The Democratic Alliance agrees with some of the stories in that South Africa, through the effort of all of us, is a much better place to live in than prior to 1994. We also believe that in certain aspects our learners are much better off – the vast majority of our learners in more than 80% of our no- fee schools are fed on a daily basis.

Hon Speaker it is good to want to tell good stories, but our story telling should be balanced.

Hon Speaker, no reference was made to our perennial post provisioning issues in our schools. These Post Provisioning issues have been festering since 2003. The Department of Education has issued a memorandum declaring a moratorium on any new appointments from outside the system. This implies that if a substantive vacant post cannot be filled through the reassignment of educators in excess, that post will remain vacant as per instruction of a memorandum issued.

Hon Speaker, expectations were created that there will be a teacher in front of every classroom and that no learner will be left unattended. Why then, Hon Speaker, is this Government hell-bent on telling good stories, but refrains from being judged on their incapacity to deliver quality education through the provision of adequate human resources? This inaction of the Government to fill each and every post in our schools is unacceptable, and can never be condoned.

What do you tell a school like Chatty Secondary School in Port Elizabeth that must do without 7 funded posts? How do we as a Government expect our schools, such as Chatty Secondary and 700 others, to function with skeleton staff? We have more than 8 000 vacancies in our schools, and every time when this Government is approached as to how and when these vacancies will be filled, they always respond, we have a plan and we working on it. Yes, the Government has been working for 12 years designing their plan, yet with no positive outcomes.

Hon Speaker, I have two more sad stories to tell. In our Province we have simply too many schools that don’t have the basic infrastructural requirements, such as the 1 049 schools without proper or no sanitation facilities, affecting the daily lives of 260 000 learners and infringing on their constitutional and human rights.

We have read about the sad story of a 6-year-old Limpopo learner Michael Komape, who drowned in a pit-latrine last month. Hopefully, this Eastern Cape Government has put preventative measures in place not to have such a sad and devastating tragedy in our schools.

Hon Speaker, on a visit in early February to four schools in Butterworth, one school in particular stood out above the rest: Gwabe Senior Primary School in Gwadana is in a dreadful state – 82 pupils are taught in two mud structures. Sixty eight of these children, from Gr R to 3, are taught in one rondawel by 3 educators simultaneously.

As an adult I could not even spent 5 minutes within that cramped space. The rondawel has no windows and no ventilation. These learners are at risk of dehydration in summer. This, Hon. Speaker is most certainly not a good story, but this story need to be told.

In conclusion, I agree that effective leadership is not about making speeches or being liked – leadership is defined by the results, not attributes. Hon Speaker I will most certainly hold this leadership accountable to this quote by the Premier.