DA set to make significant inroads in the Eastern Cape 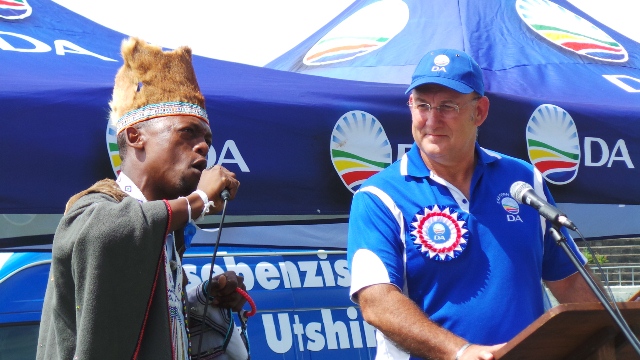 Praise singer Andile Gqitami with Athol Trollip, DA Leader in the Eastern Cape and candidate for Premier in the province at the Sisa Dukashe stadium in Mdantsane on Sunday, 16 March 2014.

Note to Editors: This statement is based on a speech delivered by Athol Trollip at the Sisa Dukashe stadium in Mdantsane on Sunday, 16 March 2014, to launch the DA’s Eastern Cape election campaign.

This year’s election promises to be the most exciting and close-fought since 1994.

I can feel it everywhere I go. Former ANC, COPE and UDM supporters are coming over to the DA in unprecedented numbers. Just this week Nqaba Bhanga, a COPE MP joined us at a packed meeting in New Brighton.

I can see it in our branches. Our membership is surging in former ANC strongholds and every day we gain more and more activists. Many of you who are here today are activists for the party. To you I want to say: Thank You! You are the backbone of this party. You are the reason we keep growing. You are truly working to make South Africa a better place.

I can see our growth in by-elections, especially in the rural areas of the province. We are winning voting districts in places like Mbhashe and other rural areas across the province. We are retaining all our wards with increased majorities and are constantly increasing our support in ANC wards. Right here in Buffalo City ward 3 we grew from 52% to 82% in a recent by-election.

This happened in 2011 too when the DA increased its number of councillors across the province from 100 to 178. In the former Transkei we grew from 2 councillors to 16. In the Nelson Mandela Bay Metro, the ANC only managed 51.9%. The growth that we experienced in 2011 is the same growth that the DA will experience in 2014.

People are changing because they are hungry for something different.

I can see it in our polling. Our party runs one of the most sophisticated polling operations in the world and let me just say that the ANC is in for a shock in the Eastern Cape in this election.

People are changing their votes from the ANC to the DA for a clear reason: The ANC of Tambo, Mandela and Mbeki no longer exists.

The ANC under Jacob Zuma today is not the same party as the party that liberated South Africa. They share the same logo and the same name, but that is where the similarities end.

In Buffalo City where we are today our front pages are dominated by corruption. The recent taxi scandal around Nelson Mandela’s funeral is but one of many.

But we should pause for a moment and think about where we are as a country.

But since 2009, things have stalled. President Zuma is slowly taking South Africa backwards. There is too much corruption, too much bhuti-bhuti politics and not enough jobs.

In the EC we know what the reasons are: Cadre deployment and corruption. People are getting jobs because they are connected to the ANC. This is why service delivery is failing.

In the Eastern Cape we have a very high unemployment rate running at 43% when we look at the expanded definition of unemployment. People are leaving our province and because of that the equitable share we receive from government has been cut by R5.1 billion. We need to become a province where jobs are created and not become a labour pool for others.

If we fix our administration, if we get rid of corruption, if we put the right people into jobs, if we maintain our roads network, and vastly improve our education system the Eastern Cape will become a place where businesses will flock to, to come create jobs

Education is the foundation of opportunity in life. A DA government will ensure we fix the rot in education in our province. Schools will have basic infrastructure, such as water, toilets and electricity. We will ensure that there is a teacher in every classroom with textbooks for every learner.

Right here in Buffalo City, there were revelations the other day that 221 children have to attend a single class at the Sinempumelelo Primary School. No quality education can take place when 221 children are squashed into a single prefabricated classroom. So we need to look for a new way forward to find solutions.

The DA has changed too. Where we once were only an opposition party, we are today a party that is ready to govern. We are growing stronger and stronger every day in every community.

That is why we have policies to improve education, create 6 million new jobs, create 1 million internships every year and pay for every single qualifying South African’s tertiary education. We are a rich country. We can afford to do these things if we cut out the corruption.

Corruption is what stands between us and making this dream where everyone has a chance in life a reality. We must stop the corruption.

So I say to you, give us a chance in this election. Join the blue wave that is sweeping across this province and give the DA chance to show what we can do.

Vote DA to stop the corruption. We want to bring people together to stop corruption and create jobs.