Impasse around Red Location Museum must be broken 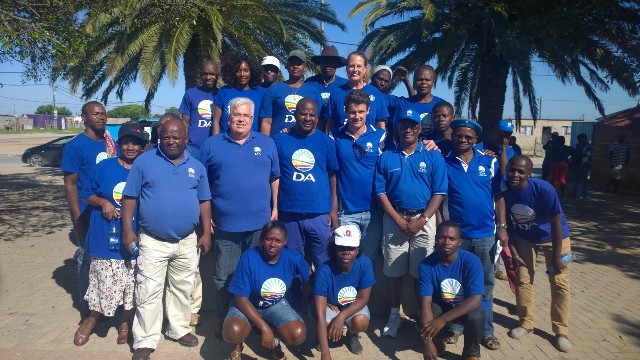 DA leaders Nqaba Bhanga, Andrew Whitfield and Bobby Stevenson took the DA’s campaign for Change and Jobs to the Red Location in New Brighton on Wednesday.

DA leaders Nqaba Bhanga, Andrew Whitfield and Bobby Stevenson will be taking the DA’s campaign for Change and Jobs to the Red Location in New Brighton on Wednesday, 9 April 2014.

This will be one of five stops on a door-to-door road show across the newly formed Ngqura Constituency. Other stops will take place in Zwide, Motherwell and Soweto On Sea among others.

The Red Location Museum has been closed for a number of months as a result of an impasse between the community and provincial and local government because they have not resolved housing issues in that community.

The local and provincial government has repeatedly promised to deal with these housing issues but has failed to do so.

This bureaucratic impasse must be broken. It is actions such as these which are costing us much needed jobs in the Nelson Mandela Metropole.

The Red Location Museum has the potential to become an iconic tourist must see feature in the Eastern Cape.

For every eight tourists we attract to our city on a sustainable basis, we create one job.

The Eastern Cape has a high unemployment rate of 43% when one looks at the expanded definition.

The ANC government under President Jacob Zuma has not delivered on its job creation promises. When he was elected in 2009, President Zuma promised to create 5 million more jobs. Since he assumed the presidency, more than 1.4 million have joined the ranks of the unemployed.

What we need is innovative policy solutions to allow every South African a chance to participate in the economy for getting a job or starting a business. This means we need to cut red tape and we need government that is responsive to its citizens.

The fact that bureaucratic incoherence is stifling the development of the Red Location Museum Complex is bad for economic development in New Brighton.

The DA believes that we need electoral reform to have a constituency based system together with proportional representation.

If there was a constituency member responsible for New Brighton, this impasse would have been broken a long time ago.

The museum would have opened and an environment for job creation in New Brighton would be a lot more favourable.

The DA will take the following steps to improve the environment for job creation:

The DA is committed to redressing the economic legacy of apartheid. It is the DA’s priority to grow the economy and create jobs and to cut corruption and empower people through excellent education.

Our 8% economic growth policy will create 6 million real jobs over a ten year period. It is possible to grow our economy at 8%. While Nigeria’s economy is scheduled to grow at 7, 1 % next year, ours is only growing at 2, 3% this year.