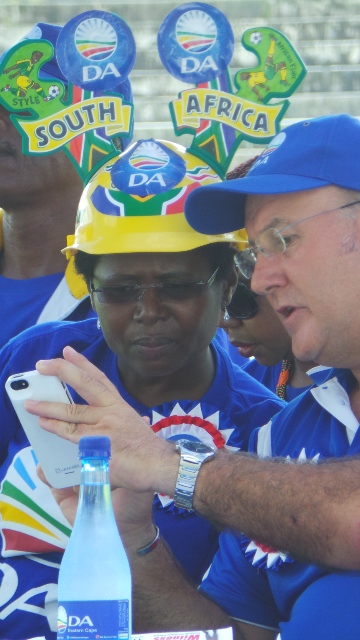 You can daily follow the real story of the Democratic Alliance’s rise in the Eastern Cape by viewing our Eastern Cape Facebook page as well as following us on twitter. We have the biggest provincial following of any eastern cape political party with over 10 000 likes on Facebook and 5000 on twitter.

The public can stay updated with the gruelling schedule of the provincial leadership as the Blue Wave maintains its blistering pace of barnstorming our cities, towns and villages throughout the Eastern Cape.

Watch the full dimension of the DA as the force of change and growth in the Eastern Cape. Follow provincial leader Athol Trollip and DA representatives Veliswa Mvenya, Edmund van Vuuren, Nosimo Balindlela and Nqaba Bhanga as well as local activists, as they bring our message of change and jobs to voters.

By clicking on these pages you see for yourself the real reasons for the DA’s explosive growth in the Eastern Cape and why for example we even campaign on horseback.

The DA in the Eastern Cape is the most active party in the province on social networks and is making extensive use of Facebook and twitter to get its message across particularly to young voters.

Recent surveys have shown that the DA will continue to experience considerable growth in the upcoming general elections. This trend is reflected in the numbers of people visiting, following, retweeting and commenting on our various social media forums.

For updates on campaign tours, media statements and speeches, follow the DA in the Eastern Cape on: