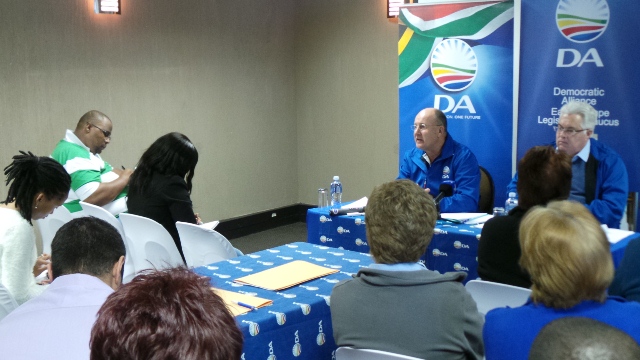 DA leader in the provincial legislature, Athol Trollip, held a press conference in East London this morning to give details about the institution’s continued efforts to protect the Premier from answering parliamentary questions relating to the Mandela funeral scandal.

The Eastern Cape Provincial Legislature has, for a second time, blocked questions by the DA regarding funding for the funeral of former President Nelson Mandela.

In correspondence received from the Legislature  Correspondence I am informed that “…the oral question cannot be included in its original format or otherwise on the next IQP containing oral questions…”. This is in response to my objection that my original question was subverted by the legislature to exclude reference to the Premier, Phumulo Masualle’s personal bank account. For my original question and the altered question, click RAP Trollip Question for oral reply and IQP 3 ORAL 2014 5TH TERM

The reasons given are not only spurious, they are inconsistent with the Speaker, Noxolo Kiviet’s ruling in the original questions session where she disallowed me the opportunity to ask a follow-up question to the Premier.

Since this debacle the Premier and his spin doctors have tried to explain the transfer of public funds into his personal account as a conspiracy. If this was indeed a conspiracy, the question that must be asked is, what does the Premier and the legislature fear from answering a very straight forward question from the opposition?

One would have thought that this would be an ideal opportunity to put this embarrassing saga to bed once and for all. Instead, each week and month since the sad funeral of former President Nelson Mandela more and more intrigue and embarrassment around this funding fiasco has surfaced.

The DA will not allow the legislature, nor the ANC to sweep the matter under the carpet. We will use every avenue at our disposal to fulfil our electoral mandate to hold the executive and the government to account.